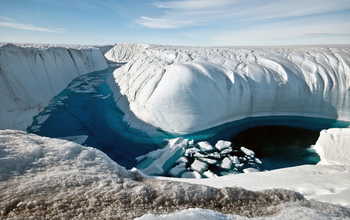 A Greenland ice canyon filled with meltwater in summer 2010.

On May 11, Secretary of State Rex Tillerson signed an agreement to promote Arctic scientific cooperation by breaking down barriers to scientific research and exploration.

Canada, Denmark, Finland, Iceland, Norway, the Russian Federation, Sweden and the United States are parties to the agreement.

The "Agreement on Enhancing International Arctic Scientific Cooperation" is the product of three years of work by the Arctic Council's Task Force for Enhancing Science Cooperation. The U.S. delegation to the task force, led by the National Science Foundation's (NSF) Office of Polar Programs, represented several U.S. science agencies.

This is the third legally binding agreement the parties have negotiated under the auspices of the Arctic Council.

The agreement entered into force upon its signature.