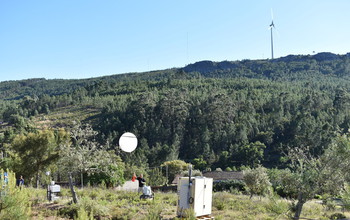 Perdigão scientists study valley meteorology and the "wake" of the wind turbine.

Over the past month, researchers have descended on Portugal's Vale Do Cobrão near the Spanish border to study the valley's wind flow patterns.

The international project, known as Perdigão after the closest town, is funded by the National Science Foundation (NSF) and involves more than 50 atmospheric scientists. They're working to better understand how wind moves over variable terrain.

The project began on May 1 and will continue until June 15.

"The Perdigão field experiment is an impressive effort that involves U.S. researchers and their colleagues in Europe," said Nick Anderson, program director in NSF's Division of Atmospheric and Geospace Sciences, which funds Perdigão. "Data from Perdigão's instrument array will improve our understanding of wind flow over complex terrain, with benefits to weather forecasting and wind energy."

The United States and the European Union have expressed interest in increasing wind energy shares of their respective total energy consumption. Doing so will require updated models for a more detailed and accurate understanding of wind flow in natural settings, scientists say.

The research promises to improve assessments of wind resources in Europe and elsewhere, and to help determine optimal sites for building wind turbines. Scientists at the Perdigão site are using an existing, full-scale turbine to study interactions of the turbine with varying wind flows and topography.

Vale Do Cobrão, which stretches between two parallel ridges, is a mosaic of farmland, vegetation, canyons, gullies and a river. The valley's wind flow is usually perpendicular to the ridges, but can reverse and build to powerful gusts. The researchers' instruments are collecting data on wind flow, including velocity, turbulence, temperature, moisture and radiation.

The Perdigão project is a paradigm shift from previous field studies, according to Harindra Fernando, principal investigator of the study for the U.S. group and a scientist at the University of Notre Dame.

"Perdigão is a leap forward from the early wind flow experiments conducted in the late 1970s," Fernando said. "Those studies focused on wind flow over a single hill. The resulting data have been, and continue to be, heavily used today."

Perdigão capitalizes on recent technological advances in remote sensing. It includes 30 scanning and profiling units to map the valley's atmosphere, Fernando said. Researchers will map the flow field in greater detail using improved models and a new understanding of wind flow based on the new data set.

Along an estimated 4-mile-long, 1-mile-wide swath of the valley, researchers have set up an array of instruments, including approximately 50 towers ranging in height from 10 to 100 meters. The towers are equipped with sonic anemometers to measure air flow and turbulence.

In addition, four to 16 radio soundings are being deployed to map the atmospheric structure in and above the valley. Additional equipment will track fine-scale turbulence, pressure perturbations, lower atmospheric meteorological profiles and acoustic levels.

By the end of the project, the scientists will have obtained the most advanced wind flow data to date.