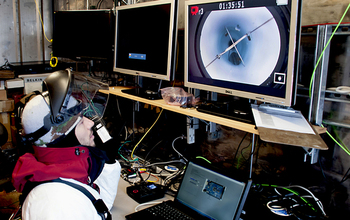 Ken Markoff of the University of California, Santa Cruz monitors the WISSARD borehole in 2013.

An interdisciplinary team of researchers funded by the National Science Foundation (NSF) has concluded that bacteria in a lake 800 meters (2,600 feet) beneath the West Antarctic Ice Sheet may digest methane, a powerful greenhouse gas, preventing its release into the atmosphere.

As part of the NSF-funded Whillans Ice Stream Subglacial Access Research Drilling (WISSARD) project, the researchers successfully drilled through the ice sheet in 2013 to reach Lake Whillans. They retrieved water and sediment samples from a body of water that had been isolated from direct contact with the atmosphere for many thousands of years.

The prevalence of methane-consuming bacteria in the upper lake sediment suggests a "methane biofilter" prevents the gas from entering the subglacial water, where it can eventually drain into the ocean and be released into the atmosphere. The bacteria obtain energy from digesting the methane.

The team, which includes researchers from Montana State University, Louisiana State University and Aberystwyth University in Wales, used a combination of measurements of methane concentrations and genomic analyses to describe how lake bacteria chemically convert methane in a way that reduces the warming potential of subglacial gases during ice sheet retreats.

The scientists say that if their analysis is correct, it could mean that a large reservoir of methane thought to lie under the vast West Antarctic Ice Sheet -- which encompasses 25.4 million cubic kilometers (6.1 million cubic miles) of ice -- is less likely to be released into the atmosphere.

They also note that because methane is such a potent greenhouse gas, "understanding its global sources, sinks and feedbacks within the climate system is of considerable importance" to the scientific understanding of the larger global climate picture.

The team published its results today in the journal Nature Geoscience.

Their findings describe how biological processes in the sediments at the lake bottom transform the methane into carbon dioxide. This area, where the water meets the lake bottom, may be vital to the success of ecosystems of subglacial lakes, which are permanently cut off from atmospheric heat and sunlight.

"Not only is this important for the global climate, but methane oxidation could be a widespread means of life for microbes in the deep, permanently cold biosphere beneath the West Antarctic Ice Sheet," said Alexander Michaud of Montana State University, the lead author on the paper.

Studies of subglacial lakes may contain clues as to how microbial life might persist in the outer solar system, where ice-covered moons orbit the larger planets.

In recent decades, researchers, primarily using airborne radar and satellite laser observations, have discovered a continental system of rivers and lakes -- some similar in size to North America's Great Lakes -- beneath the Antarctic ice sheet.

The WISSARD project was preceded by ongoing field research that began as early as 2007 to place this individual lake in context with the larger subglacial water system. The NSF's U.S. Antarctic Program funded, and provided the complex logistics, for those investigations and the sampling of Lake Whillans.

"It took more than a decade of scientific and logistical planning to collect the first clean samples from an Antarctic subglacial environment, but the results have transformed the way we view the Antarctic continent," said John Priscu of Montana State University, a co-author on the paper.