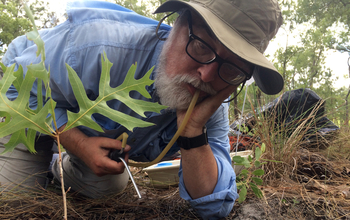 The National Science Foundation (NSF) has issued 10 new awards, worth a total of $12.2 million, through its MacroSystems Biology and Early NEON (National Ecological Observatory Network) Science program. These awards will support research to help better detect, understand and predict the effects of phenology, climate and land-use changes on living systems, and also predict the feedbacks to the environment that cross local and continental scales.

"The scientific community has seen a recent boon of new tools, from remote ecological sensor networks to citizen scientist-generated data, that allows us to study biology at scales that were never possible before," said James Olds, head of the NSF Biological Sciences Directorate, which oversees the MacroSystems Biology and Early NEON Science program. "These projects take advantage of those new tools, asking questions about how measurements made at one scale can be applied to others. Macrosystems science studies every dimension of biology, from genes to the globe."

Living organisms interact with their local environment in many ways. They both change the environment and are changed by it. Over larger areas, millions or even billions of organisms interacting with their individual environments have effects on a much larger scale that are not always predictable. The field of macrosystems biology emerged in recent years to study how widespread local interactions cause changes to organisms and their environments at regional to continental scales, and how changes that occur over very large areas influence the local interactions.

One significant kind of change involves the shifting of seasons across the planet. At the local level, flowers are blooming sooner, leaves are changing colors later, birds are migrating earlier and staying longer, and new insects are appearing. Across the continent, new patterns are altering local and regional weather, confusing the relationships between pollinators and plants, affecting important populations of native and invasive insects, and altering forest productivity.

This year's MacroSystems Biology awards support researchers investigating a broad range of practical questions. One project strives to understand the effects of management on forest productivity. Another attempts to show how continental-scale factors -- such as temperature, precipitation and nutrients -- structure terrestrial arthropod communities (mites, spiders, insects), the most diverse and abundant animal group.

Yet another project focuses on how the changing forest phenology -- cyclical and seasonal phenomena -- affects weather and climate across the continent. Macrosystems biology is supporting both the creation of a global network to study how Earth's 100 million-plus lakes behave, and the creation of a training program to introduce macrosystems science into the undergraduate college curriculum. The new awards support interdisciplinary research and activities that enable groups to conduct planning, training and development of macrosystems research.

Public participation in scientific research has contributed data to several of these projects through ongoing NSF-funded citizen science programs. Citizen scientists are helping with three projects: understanding the causes and consequences of phenological mismatches; exploring the large-scale biology of a well-known butterfly; and documenting the presence of an important invasive insect. Through the Season Spotter project, the public is actively involved in the analysis of photographs to identify seasonal changes in forest phenology.

Several of the new awards use data from the NSF-supported National Ecology Observatory Network (NEON), a collection of 81 sites around the nation that deliver standardized ecological data to the scientific community and public through an open-access portal. NEON provides a unique combination of air- and ground-based sensors and field sampling with statistical, physical and biological modeling. This combination enables the scientific community to perform studies that explore how the diversity of plants and animals affects the productivity of ecosystems at the regional to continental scale and how that diversity influences local weather and regional climate.

The awards fall into one of three categories: Full Research Award (FRA), which supports macrosystems biology research or innovative training to conduct such research; Early Career Track (ECA), for early career scientists; and Early NEON Science Track (ENS), which allows for the innovative use of NEON samples and infrastructure.

The new awards, their principal investigators and sponsor institutions are: