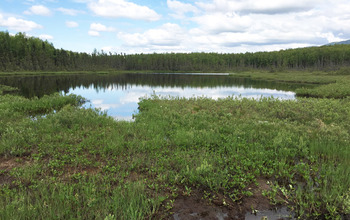 NSF Dimensions of Biodiversity grantees will study Campbell Lake and nearby peatlands in Alaska.

Symbiotic bacteria -- microbes that have close and long-term relationships with their "hosts" -- are everywhere on Earth: in soil, in coral reefs, in humans.

Through a new National Science Foundation (NSF) Dimensions of Biodiversity grant, scientist Joel Sachs of the University of California, Riverside, will look at native California legume plants and their symbiotic nitrogen-providing bacteria, as well as at the soil in which the plants are rooted, to determine the magnitude of the benefits the bacteria provide.

Sachs plans to educate farmers on plant-microbe interactions. His research will guide how microbes may be used to increase the productivity of agricultural systems.

The project is one of seven funded this year through the Dimensions of Biodiversity program, a unique research initiative that integrates multiple areas of study, in contrast to traditional biodiversity studies that focus on one taxonomic group or ecosystem.

The program is part of NSF's Environmental Research and Education (ERE) portfolio.

A total of $15.2 million has been invested in the awards, $14.75 million from NSF's Directorate for Biological Sciences and $450,000 in co-funding from the National Natural Science Foundation of China.

"These awards showcase the creativity of scientists and the power of biology to understand the rules by which communities of organisms form, interact and change through time," says James Olds, NSF assistant director for Biological Sciences. "The projects examine global-scale gradients in biodiversity and the eco-evolutionary feedbacks between coexisting species and their environments in new and transformative ways."

The research will fill gaps in biodiversity knowledge, scientists say. It also has the potential to lead to significant progress in agriculture, fuel, manufacturing and health.

For example, plant and animal extinctions are detrimental to human health, researchers have found. Species losses in ecosystems such as forests and fields result in increases in pathogens, or disease-causing organisms. The species most likely to disappear as biodiversity declines are often those that buffer infectious disease transmission. Those that remain tend to be ones that magnify diseases such as Lyme disease.

Economic sustainability also depends on the diversity of life on Earth. Many industrial materials, such as fibers and dyes, come from biological sources. In addition, biodiversity is important to water, food and pharmaceuticals.

To conserve Earth's biodiversity, scientists funded through the Dimensions of Biodiversity program are working to better understand interactions between, for example, plants and insects.

The 2017 Dimensions of Biodiversity projects focus on topics that include: genome structure and adaptive evolution in peat mosses as ecosystem engineers; biotic and abiotic (such as water and soil) drivers of Central and South American plant speciation, whereby one species becomes two; and determining why insects are tolerant of potent toxins in plants they consume.