Final seismic station has been installed in Alaska 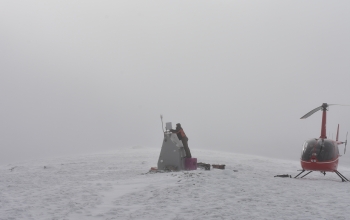 Seismic station A19K, it’s called, and it’s now at the edge of an abandoned airstrip far above the Arctic Circle. The nearest population center is 127 miles northeast in Utqiaġvik (formerly known as Barrow), the northernmost city in the United States. What a way to celebrate Earth Science Week, Oct. 8-14, 2017.

The seismic station is part of EarthScope, a project funded by the National Science Foundation (NSF). It's one of hundreds of stations collectively called the Transportable Array. As its name suggests, the array can and does move from place to place.

Station A19K is the last installation in a 280-station Alaska seismic network that continuously records ground motion from local, regional and global earthquakes and broadcasts its data in real time.

The Transportable Array also covers the lower 48 states coast to coast with a grid of stations at nearly 1,700 sites.

EarthScope scientists are exploring the structure and evolution of the North American continent, and the processes controlling its earthquakes and volcanic eruptions. The Transportable Array is constructed, operated and maintained by the Incorporated Research Institutions for Seismology (IRIS) through cooperative agreements with NSF.

The long-planned, current two-year deployment of the Transportable Array in Alaska will help researchers understand earthquakes in Alaska; map faults and assess seismic hazards throughout the state; and image the crust and deep-Earth structure beneath Alaska.

"The successful construction of the seismic array in a challenging environment like Alaska is a major achievement with significant scientific and societal benefits," said Maggie Benoit, program director in NSF's Division of Earth Sciences, which funds EarthScope. "The Transportable Array is enabling scientists to image the interior of the Earth to depths of several hundred miles. While it’s operating, it will enhance observation and warning capabilities for natural hazards such as earthquakes, tsunamis and volcanic eruptions."

Alaska is the most seismically active state in the U.S., with more than 25,000 earthquakes each year. Yet it has relatively few stations to monitor seismic activity. These stations are mostly located in the populated southern part of the state.

Alaska has been the final goal of the Transportable Array since its stations started to be installed across the lower 48 states in 2004.

"We saved the best, and hardest, for last," said Bob Woodward, director of the USArray, the seismic component of EarthScope. "Operating in the lower 48 allowed us to learn how to scale up our operations before moving to an environment where the logistics and terrain are much more challenging."

Stations in the lower 48 were installed using trucks to travel to the sites (primarily farmland) and backhoes to create vaults for the sensors and other equipment.

Because the vast majority of Alaska is inaccessible by roads, a major change in strategy was needed.

Helicopter operations were essential for installing seismic equipment across large swaths of the state that have never hosted seismometers.

Using helicopters, field teams deployed stations across the most remote regions of Alaska. A lightweight drill was designed to make and encase a 10-foot borehole in rock, permafrost and other ground types.

A newly available posthole seismometer was placed directly into each hole, then connected to a sturdy hut containing the electronics, batteries and solar panels needed to keep the station powered, operating and transmitting data.

"We’re using one of the largest observing tools in science in an unexplored region with clear earthquake hazards that we hope to understand better," said Bob Busby, manager of the Transportable Array.

Signals from the seismic sensors are sent to the Array Network Facility in San Diego in real time as soon as a station is built, and all data are made freely available to the public.

The benefits in Alaska are immediate. Geologists at the Alaska Earthquake Center, for example, are incorporating the information into their earthquake detection and location programs.

The Alaska stations have also hosted additional scientific sensors. Meteorological sensors are mounted on 130 of the most remote stations. Wind, temperature, humidity and precipitation data are streamed from the stations and incorporated into weather forecasting. Soil temperature probes have also been installed at about 80 of these northern sites as part of a permafrost study.

Benefits of the Alaska array

Benefits of the Alaska Transportable Array stations are not just for Alaskans, scientists say. The research "will improve our understanding of the Earth, and of earthquakes, from one of the most active natural earthquake 'laboratories' on the planet," said Woodward.

Its success is due largely to the efforts of a small number of employees who have coordinated shipping schedules and land-use permits, and spent the past three summers working in poor weather conditions and dodging wildfires across Alaska and western Canada, according to Woodward.

At times, conditions were harsh. Many stations have been gnawed by curious bears, some have faced winds of more than 120 miles-per-hour, and one was reduced to cinders in the 2015 Sockeye fire (it was rebuilt the same year). But the stations are durable and performing well, Woodward said.

Operators and researchers are investigating ways of extending the life of the stations, which are planned to remain in Alaska through 2019.

Scientists affiliated with the EarthScope project in the lower 48 states transferred 158 Transportable Array stations to the Central and Eastern United States Network (CEUSN), a longer-term seismic station sub-array. Researchers hope that a similar plan may develop in Alaska.