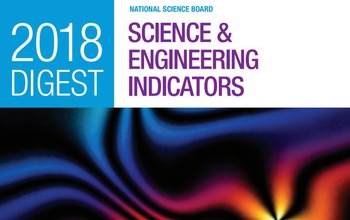 According to the National Science Foundation's (NSF) Science and Engineering Indicators2018 report released today, the United States is the global leader in science and technology (S&T). However, the U.S. global share of S&T activities is declining as other nations -- especially China -- continue to rise.

The National Science Board (NSB) is the governing body of NSF and publishes the congressionally mandated report on the state of the U.S. science and engineering (S&E) enterprise every two years. The 2018 report shows the U.S. invests the most in research and development (R&D), attracts the most venture capital, awards the most advanced degrees, provides the most business, financial and information services, and is the largest producer in high-technology manufacturing sectors. The complete report, which covers data on the domestic and global science and engineering landscape, is available online.

"NSF's Science and Engineering Indicators is the highest-quality and most comprehensive source of information on how the U.S. scientific and engineering enterprise is performing domestically and internationally,” said NSF Director France Córdova. "The 2018 report presents a wealth of easily accessible, vital data. It provides insights into how science and engineering research and development are tied to economic and workforce development, as well as STEM education, in the U.S. and abroad."

"This year's report shows a trend that the U.S. still leads by many S&T measures, but that our lead is decreasing in certain areas that are important to our country," said Maria Zuber, NSB Chair and Vice President for Research at the Massachusetts Institute of Technology. "That trend raises concerns about impacts on our economy and workforce, and has implications for our national security. From gene editing to artificial intelligence, scientific advancements come with inherent risks. And it's critical that we stay at the forefront of science to mitigate those risks."

China's growth in S&E continues at an exceptional pace

R&D expenditures reflect a nation's commitment to expanding capabilities in S&T, which in turn drive innovation. While the U.S. led the world in R&D expenditures at $496 billion (26 percent share of the global total), China was a decisive second at 21 percent ($408 billion). China has grown its R&D spending rapidly since 2000, at an average of 18 percent annually. Its focus is geared primarily toward development rather than basic or applied research. During the same time frame, U.S. R&D spending grew by only 4 percent. Although emerging economies start at a lower base and therefore tend to grow much more rapidly, China's growth rate is exceptional.

Venture capital investment, which supports the commercialization of emerging technologies, totaled more than $130 billion globally in 2016. While the U.S. attracted the most investment (nearly $70 billion), accounting for slightly more than half of the global share, 26 percent of total venture capital funds went to China. Venture capital in China rose from approximately $3 billion in 2013 to $34 billion in 2016, climbing from 5 percent to 27 percent of the global share, the fastest increase of any economy.

Knowledge and technology-intensive industries -- in which S&T advances are key inputs -- are a major part of the global economy, comprising nearly one-third of world gross domestic product (GDP). America leads in providing business, financial and information services, accounting for 31 percent of the global share, followed by the European Union (EU) at 21 percent. China is the third largest producer of these services (17 percent global share) and continues to grow at a far faster rate (19 percent annual growth) than the U.S. and other developed countries. The U.S. is the largest producer of high-technology manufacturing (31 percent global share). This includes production of aircraft and spacecraft, semiconductors, computers, pharmaceuticals, and measuring and control instruments. China is second at 24 percent, more than doubling its share over the last decade.

Higher education provides the advanced work skills needed in an increasingly knowledge-intensive global economy. According to the most recent estimates, the U.S. awarded the largest number of S&E doctoral degrees (40,000) of any country, followed by China (34,000), Russia (19,000), Germany (15,000), the United Kingdom (14,000) and India (13,000). In contrast, the U.S. lags in bachelor's level degrees. India earned 25 percent of the more than 7.5 million awarded S&E bachelor's level degrees in 2014, followed closely by China (22 percent), the EU (12 percent) and the U.S. (10 percent). Nearly half of all degrees awarded in China are in S&E fields. Since 2000, the number of S&E bachelor's degrees awarded in China has gone up by 300 percent.

Over the past twenty years, students have become more mobile and countries increasingly compete for them as potential recruits for the S&E workforce. International student numbers in the U.S. dropped between the fall of 2016 and the fall of 2017, with the largest declines seen at the graduate level in computer science (13 percent decline) and engineering (8 percent decline). International students account for over 57 percent of graduate enrollments in computer sciences and engineering in the U.S. These students are a critical component of the U.S. workforce in these high demand fields. Seventy-nine percent of foreign doctoral graduate students choose to stay and work in the U.S. upon completion of their degree.

Nonetheless, the federal government remains the largest funder of basic research ($36.9 billion, 44 percent of total share), and is the primary driver of both innovative research and the training of the science, technology, engineering and mathematics (STEM) workforce. The business sector accounted for $22.7 billion (27 percent of total share) in 2015.

"R&D -- basic, experimental and applied -- is the fuel that drives American business. Our ability to turn basic and experimental research results into practical applications is the stuff of legends," said Vinton Cerf, NSB member and Vice President and Chief Internet Evangelist at Google. "We risk the continued success of the American enterprise if we fail to adopt policies that reinforce this boundless triad of opportunity. It is time to reverse the declining trend in federal research support and re-invigorate American innovation."

"What is clear from Indicatorsis that even though there is a rise in many emerging economies, there's also more specialization areas emerging as top fields," said Geraldine Richmond, Chair of NSB's Science and Engineering Policy Committee and Presidential Chair and Professor Chemistry at the University of Oregon.

"From my own experience working with a number of developing countries, I think one of our strengths is our ability to educate students to solve problems. Our innovations and patents really reflect that U.S. creativity remains one of our biggest assets," said Richmond.

At the same time, the world's scientists are increasingly collaborative in their research endeavors. Among the major producers of S&E publications, the United Kingdom had the highest international collaboration rate (57 percent) in 2016, followed by France (55 percent) and Germany (51 percent). The U.S. followed with a 37 percent international collaboration rate, up 12 percent from 2006. The impact of S&E publications has also become more global. Between 2004 and 2014, the share of U.S. publications with citations from abroad increased from 47 percent to 56 percent. Countries also specialize in different fields of research, with the U.S., EU and Japan publishing heavily across the medical and biological sciences, while India and China focus on engineering.

Science and Engineering Indicators is the most comprehensive source of high quality federal data on a wide range of topics that include trends in global R&D investments and knowledge-intensive industries, K-12 and postsecondary STEM education, workforce trends and composition, state level comparisons, public attitudes and understanding, and invention, knowledge transfer and innovation. Related products -- including state fact sheets -- are available on the Indicators 2018 resource page.

The National Science Board and the National Science Foundation's Director jointly head NSF. NSB identifies issues critical to NSF's future and establishes the Foundation's policies. The NSB also provides the President and Congress with Science and Engineering Indicators,a biennial report on U.S. progress in science and technology. Members are appointed by the President for six-year terms and selected for their eminence in research, education and records of distinguished service.