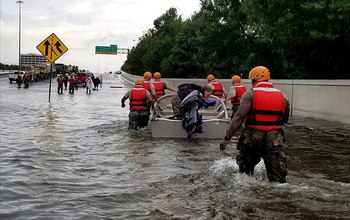 First responders from across the U.S. came to the rescue during floods from Harvey's rains.

During 2017, NSF announced new research in everything from large-scale disasters to the food-energy-water nexus, and celebrated new discoveries, such as the detection of two neutron stars colliding. Division of Earth Sciences research grabbed two of the spots among NSF’s Top 10 most read stories on nsf.gov.

Today, the number of people on our planet is 7.5 billion. By 2087, that number is projected to grow to 11 billion people. How will we continue to have a sustainable supply of food, energy and water, and protect the ecosystems that provide essential services?

To help answer these questions, NSF partnered with the U.S. Department of Agriculture’s National Institute for Food and Agriculture to award $46.6 million in new grants through the jointly funded Innovations at the Nexus of Food, Energy, and Water Systems program.

Hurricane season hit the United States hard in 2017. First, Hurricane Harvey drowned Houston in torrential rain. Shortly after, Hurricane Irma did the same in many parts of Florida. Round three came when Hurricane Maria devastated Puerto Rico. In the wake of extensive hurricane damage, NSF awarded more than 50 grants to study hurricane effects.