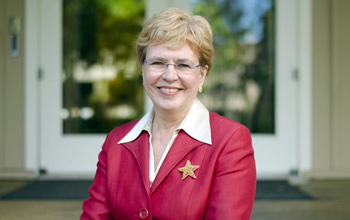 The National Science Board (NSB, Board) is pleased to announce that Jane Lubchenco, distinguished university professor and marine studies advisor to the president at Oregon State University, will receive its 2018 Vannevar Bush Award.

The award honors truly exceptional lifelong leaders in science and technology who have made substantial contributions to the welfare of the nation through public service in science, technology, and public policy. Lubchenco’s work includes ecology, zoology, marine biology, ocean management, and public policy. Over her career, she has made fundamental contributions to the science of ecology, stimulated the broad scientific community to engage more deeply with members of the public, and worked to find solutions for societal challenges.

“Jane Lubchenco’s contributions to science and public service signifies a lifetime of extraordinary work in her efforts to preserve the health of our marine and coastal resources in harmony with the people who depend on them for survival,” said Vicki Chandler, chair of the NSB’s Committee on Honorary Awards. “Jane’s dedication to improve public welfare and leadership in affecting positive change benefit all of humankind. The National Science Board is proud to recognize her momentous body of work with this award.”

Lubchenco is a world-renowned environmental scientist who has deep experience in the worlds of science, academia, and government. She is passionate about scientists engaging with citizens to create knowledge and craft durable solutions to enable vibrant communities, strong economies and a healthy planet.  She co-founded three organizations that train scientists to communicate better and engage with society: COMPASS, the Leopold Leadership Program, and Climate Central.

As an accomplished marine ecologist, she became a distinguished leader in ocean management, climate change, and interactions between the environment and human well-being, holding many positions of distinction throughout her career.  She served as Under Secretary of Commerce for Oceans and Atmosphere, Administrator of the National Oceanic and Atmospheric Administration (NOAA), and served on the Obama Administration’s Science Team (2009-2013), and later as the first Science Envoy for the Ocean, with the State Department (2014-2016).

Under Lubchenco’s leadership, NOAA established a strong scientific integrity policy, led national climate assessments, sought to enhance the sustainability and profitability of fisheries, stabilized the primary weather satellite programs, and helped create the nation’s first National Ocean Policy.  Lubchenco is one of the world’s “most highly cited” ecologists and eight of her publications are “Science Citation Classics.”

Lubchenco has been on the faculty at Harvard University and Oregon State University and is a member of the National Academy of Sciences, the American Philosophical Society, and the Royal Society, among others. Her numerous awards include a MacArthur (‘genius’) Fellowship, 20 honorary doctorates, and the highest honor given by the National Academy of Sciences, the Public Welfare Medal.  She served as President of the Ecological Society of America, the American Association for the Advancement of Science, and the International Council for Science.

“I’m positively thrilled to receive the Vannevar Bush Award,” said Lubchenco. “It is humbling to be in the distinguished company of previous recipients, but also to have the chance to shine a spotlight on the increasingly important role that science plays in our lives.  To me, science is all about hope -- hope that we can work together to find solutions to our grand challenges.”

The NSB will present Lubchenco with its Vannevar Bush Award on May 2nd during the National Science Foundation Annual Awards Ceremony held in Washington, D.C.

The Board established the award in 1980 in the memory of Vannevar Bush, who served as a science advisor to President Franklin Roosevelt during World War II, helped to establish federal funding for science and engineering as a national priority during peacetime, and was behind the creation of the National Science Foundation. Past award recipients include: Norman Augustine (Lockheed Martin), James Duderstadt (University of Michigan), Leon Lederman (Fermilab), Shirley Ann Jackson (Rensselaer Polytechnic Institute), David Packard (Hewlett-Packard Company), Robert Birgeneau (University of California, Berkeley), and most recently, Rita Rossi Colwell (University of Maryland College Park).

The National Science Board and the National Science Foundation's Director jointly head NSF. NSB identifies issues critical to NSF's future and establishes the Foundation's policies. The NSB also provides the President and Congress with Science and Engineering Indicators, a biennial report on U.S. progress in science and technology. Members are appointed by the President for six-year terms and selected for their eminence in research, education and records of distinguished service.