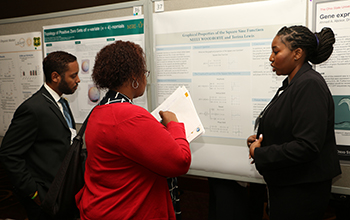 The centers will conduct broadening participation research and STEM implementation activities that lead to degree completion for minority students traditionally underrepresented in the STEM marketplace. The goal is to broadly disseminate successful practices to ensure that students underrepresented in STEM can compete in today's job market. Five of the center awards are new and one is a renewal.

The Louis Stokes Alliances for Minority Participation program in HRD funds the centers. LSAMP addresses STEM degree completion for traditionally underrepresented minorities who participate in the program -- primarily at the undergraduate and post-baccalaureate levels..

Eleven collaborative awards comprise the six centers, which are in the eastern, southeastern and midwestern regions of the nation and the U. S. Virgin Islands. The new awards range from $1.5 million for 36 months to $2.5 million for more than 60 months.

The activities of the LSRCEs contribute to the NSF INCLUDES National Network through its coordination hub activities.

The following is a list of the new centers, their collaborating institutions and a brief description of their anticipated activities.

Established in 1991, LSAMP was designed to increase the participation of African Americans, Hispanic Americans, American Indians, Alaska Natives, Native Hawaiians and Native Pacific Islanders in the STEM workforce.The main goal of the program is to increase STEM degrees in this traditionally underrepresented population.

The LSAMP program provides support to 56 alliances of institutions and other projects that contribute to diversifying STEM talent across the nation.