Statement on the Nobel Prize in Physics 2018 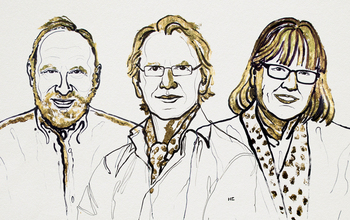 The Nobel Assembly has awarded the 2018 Nobel Prize in Physics to Arthur Ashkin of the United States for "the optical tweezers and their application to biological systems" and Gérard Mourou of France and Donna Strickland of Canada for their "method of generating high-intensity, ultra-short optical pulses." Strickland is only the third woman to win the Nobel Prize in Physics. The National Science Foundation (NSF) supported Mourou with several awards beginning in 1980 for cross-disciplinary work spanning physics, materials, electrical engineering and biology. NSF funding helped Mourou establish a biological physics facility at the University of Rochester, as well as the University of Michigan's Center for Ultrafast Optical Science (originally an NSF Science and Technology Center) and FOCUS Physics Frontier Center. NSF support also helped transition technology developed in Mourou's labs to commercial applications.

Ultra-short, high-intensity laser pulse technology has profoundly affected society, from revealing fundamental properties of the natural world to dramatically improving surgery. Electrical engineer Gérard Mourou has been a pioneer in the field and a mentor to a generation of researchers, including Donna Strickland, with whom he shares this year's Nobel Prize in Physics. NSF's funding for Mourou's foundational work began in 1980 and continued for more than two decades, along with support for him to collaborate with researchers in his native France.

The laser systems developed in Mourou's NSF-supported labs provided researchers around the world with incredible capabilities, including technologies that allow us to witness the behavior of individual molecules. Research at the Center for Ultrafast Optical Science led to the development of a new approach to LASIK, just one of many ways Mourou's leadership in science and engineering affects our daily lives. NSF is proud to support researchers like Mourou who not only produce breakthroughs but educate, inspire and enable early career scientists, who will continue to change the world.