Villagers follow the geology to healthy water in Bangladesh 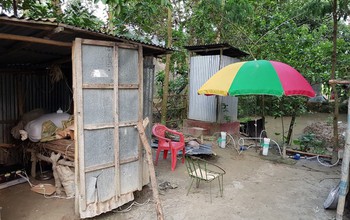 Field set-up to filter groundwater in Bangladesh for radiocarbon dating of bacterial RNA.

Scientists have found a way to fight arsenic in well water, which accounts for one of every 20 deaths in Bangladesh.

Arsenic, often referred to as the "king of poisons," has a long, sordid history as a murder weapon used in high doses to assassinate aristocrats. It's also a common natural element found in well water around the world.

In groundwater, too much arsenic is still a killer, nowhere more so than in Bangladesh. The South Asia country's 10 million or more shallow, hand-pumped wells yield water that often exceeds the World Health Organization's (WHO) arsenic guidelines of 10 micrograms per liter.

"Groundwater is popular as a water source because it is generally free of bacterial pathogens, unlike surface water," says scientist Alexander van Geen of Columbia University's Lamont-Doherty Earth Observatory.

Groundwater has to travel through rocks and sediments, which filters out most harmful bacteria. The same process adds minerals to the water -- including a lot of arsenic in some shallow wells in Bangladesh.

Van Geen will present new arsenic water survey results on Nov. 6 at the annual meeting of the Geological Society of America (GSA) in the session From Local to Global--Why Geology Matters for Human Health. GSA's 2018 annual conference is being held in Indianapolis, Indiana, from Nov. 4-7.

"Millions of people rely on water supplies that are contaminated with arsenic," says Sarah Ruth, a director of the National Science Foundation's (NSF) Dynamics of Coupled Natural and Human Systems program, which funded the research. "Consumption of arsenic-contaminated water, and the rice crops irrigated with it, can have severe health effects, including a variety of cancers and increased child mortality."

In 2013, they conducted a larger survey of 50,000 wells serving 350,000 people. The researchers found that government wells more than 150 meters deep were usually low in arsenic.

They also found that wells more than 900 meters deep were distributed in a way that suggested the wells had been taken by elite and politically connected households and were not accessible to the wider public.

The hijacking of deeper government wells by some households hasn't meant that other villagers can't access clean water, however.

People in the study area now understand that deeper is better, van Geen said. As a result, they've been drilling deeper wells, often finding low-arsenic water above a depth of 150 meters.

A survey of the study area's water documented a recent jump in the proportion of villagers drinking from wells meeting WHO guidelines. Only 25 percent of wells were safe in 2000, compared with 70 percent in 2018.

"That's good news," said van Geen. "Arsenic data from urine samples confirm that villagers aren't just telling us what we'd like to hear." Most of the decline is attributed to households reinstalling wells at their own cost.

"Some villagers have figured this out, but others still have not," said van Geen. The researchers are working to convey this information through water tests, so people can see the difference. "The region's geochemistry causes the problem, but it's also the solution," van Geen says. "Arsenic is avoidable without having to resort to water treatment."