Upgraded LIGO to search for universe's most extreme events

Grants from US, UK, Australia will fund next generation improvements to state-of-the-art gravitational wave detectors 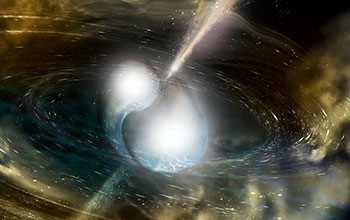 The National Science Foundation (NSF) is awarding Caltech and MIT $20.4 million to upgrade the Laser Interferometer Gravitational-Wave Observatory (LIGO), building upon the agency's four-decade investment, which has totaled more than $1 billion to date. Funded through a cooperative agreement, Advanced LIGO Plus will increase the volume of deep space the observatory can survey by as much as seven times. This investment is part of a joint international effort in collaboration with UK Research and Innovation and the Australian Research Council, which are contributing additional funds. Advanced LIGO Plus operations are expected to begin in 2024.

"This award ensures that the National Science Foundation's twin LIGO observatories, which made the first historic detection of gravitational waves in 2015, will continue to lead in gravitational wave science for the next decade. With improvements to the detectors -- which include techniques from quantum mechanics that refine laser light and new mirror coating technology -- both of our observatories will significantly increase the number and strength of their detections. Advanced LIGO Plus will reveal gravity at its strongest and matter at its densest in some of the most extreme environments in the cosmos. These detections may reveal secrets from inside supernovae and teach us about extreme physics from the first seconds after the universe's birth."

"In confirming the existence of gravitational waves, the LIGO project generated unique insights into the nature of our universe and fueled world-wide interest in science. This Nobel-winning project also illustrated the importance of international collaboration in research. The UK's technological and scientific expertise will continue to play a crucial role in ALIGO+, which aims to further increase our understanding of the events that shape the universe. The UK investment in ALIGO+ and support for a third gravitational wave detector in India underlines UKRI's commitment to developing existing collaborative research and innovation programs with partners."

For more on what to expect from the upgraded LIGO detectors, see "LIGO: Looking Forward", an interview with Rainer Weiss, Barry C. Barish and Kip S. Thorne. As recipients of the 2017 Nobel Prize in Physics for their work on the observatory, the three LIGO icons share an insider's look into the extreme phenomena the observatory's upgrades will reveal.

Visit UKRI for their full statement.

Laser Interferometer Gravitational-wave Observatory
NSF led the construction of the Laser Interferometer Gravitational-wave Observatory (LIGO) to detect gravitational waves -- ripples in spacetime created by some of the most massive known objects in space. LIGO is an instrument so sensitive that, in 2015, the array detected the collision of two black holes 1.3 billion light years from Earth. LIGO is operated by Caltech and MIT, which conceived of LIGO and led the initial and Advanced LIGO projects. Financial support for the Advanced LIGO project was led by NSF with Germany (Max Planck Society), the U.K. (Science and Technology Facilities Council) and Australia (Australian Research Council) making significant commitments and contributions to the project. More than 1,200 scientists and some 100 institutions from around the world participate in the effort through the LIGO Scientific Collaboration, which includes the GEO Collaboration and the Australian collaboration OzGrav. Additional partners are listed at ligo.org/partners.php.