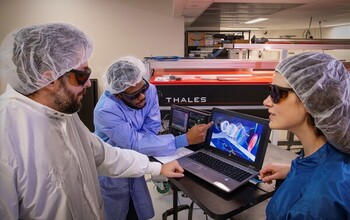 Professors Louise Willingale and Alec Thomas are plasma physicists at the University of Michigan. This married pair works with students, gives public talks, and juggles childcare responsibilities. Research looks different now that the COVID-19 pandemic has kept the kids home and limited in-person laboratory work. So they carry on their research as best they can. Louise focuses on complex data analysis and simulation while Alec works on developing theory. Meetings have all moved virtual. But their bigger project is a new state-of-the-art laser facility for the study of plasma.

Plasma, an exotic-sounding fourth state of matter, is characterized by strong electric and magnetic fields. It’s the most common of the known kinds of matter in the universe – it’s what stars are made of – but it is trickier to create and study in the lab. A high intensity laser lab, however, is the perfect place for investigating astrophysical phenomena and these researchers are teaming up to bring new, high-powered capabilities to their campus, and to the US.

The university already has a laser facility, called HERCULES, which was built as a part of an NSF Physics Frontiers Center in early 2000s. It held the world record for the highest focused laser intensity all the way up until 2017. With new NSF funding, HERCULES will be upgraded into the Zettawatt Equivalent Ultrashort Pulse Laser System, or ZEUS, complete with a new housing facility and an international user base. ZEUS will be able to produce 3 petawatts of power - that’s 3,000,000,000,000,000 watts! – in incredibly short, controlled pulses. In one configuration, one ZEUS laser beam will act as a particle accelerator, producing near-speed of light particle bunches. A second laser beamline will allow for beam collisions and the opportunity to study how intense laser light interacts with high energy particles from multiple angles. High powered laser beams like this can be used to study the fundamental physics of light and matter, and can also teach us about powerful astrophysical phenomena like blazars that are otherwise next to impossible to recreate in the lab and are only observable in far reaches of outer space.

Constructing advanced equipment like this requires help from all sides – and not just the radiation-shielding walls of the new facility! Despite the pandemic, a few delays, and lots of virtual planning conversations, building has been able to proceed, and ZEUS is on track for completion next year in 2022. Designing and building a laser like ZEUS takes a team of scientists and engineers including plasma researchers like Alec and Louise, but also people working in optics, electronics, modeling, laser technology, and project management. And the benefits won’t just be for plasma physics researchers, either. High-powered lasers are a great tool for investigating materials properties, observing particle collisions and sub-nuclear particles, and creating X-rays that can even be used for fast and detailed imaging of biological samples.

In fact, there’s precedent for laser technology like this paving the way for biomedical applications. The 2018 Nobel Prize for Physics went in part to Professor Gerard Mourou, the founding director of the Center for Ultrafast Optical Science at the University of Michigan, for the development of chirped-pulse amplification. This method of producing short femtosecond and high-energy pulses is the same technology used to boost precision in LASIK eye surgery lasers!

The team now at the University of Michigan is excited about being able to create and measure some of the fascinating properties of light and matter at the extreme. The new user facility will be one of the premier laser facilities in the US, and world-wide, and will welcome new international collaborators. With improved tools, including making use of AI technology, the scientific community will be able to probe questions about the universe that haven’t been asked before. Plus, as Louise notes, “The cool thing about experiments is they don’t always go as planned.”