NSF recognizes a mathematician and a social scientist with the Alan T. Waterman Award 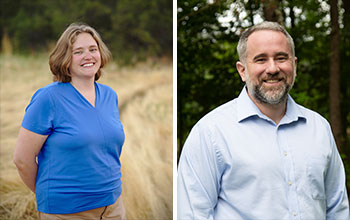 A mathematician who uses number theory to provide new perspectives on some of the oldest and most difficult problems in mathematics, and a social scientist whose innovative contributions show the impact of increased opportunity and representation on our nation’s most important decisions -- Melanie Matchett Wood, a Harvard University mathematician, and Nicholas Carnes, a Duke University social scientist and scholar of public policy, have earned the U.S. National Science Foundation's Alan T. Waterman Award, the nation's highest honor for early-career scientists and engineers.

This is the fifth year NSF has chosen to honor not one researcher, but two, with the annual award, which recognizes an outstanding early-career U.S. science or engineering researcher who demonstrates exceptional individual achievements in research in NSF-supported fields.

“It is truly a delight to recognize the outstanding talent embodied by Dr. Carnes and Dr. Wood as this year's recipients of the Alan T. Waterman Award, the highest honor given to early-career scientists and engineers,” said NSF Director Sethuraman Panchanathan. “Wood is tackling the mysteries and most complex problems in mathematics by looking into the connection of number theory and random matrices. Carnes is looking into how a person’s social background may influence their decision to pursue public service and what factors would increase their opportunities to serve.”

Throughout her scientific career, Wood has worked on some of the most difficult problems in mathematics and has developed methods that combine ideas from across mathematics. “I study questions about numbers such as what kind of patterns can we find in the prime numbers, how do numbers factor into primes, and how many solutions will an equation have,” she said.

Wood studies the statistical behavior of how factorization, (expressing a number as a product of smaller numbers -- a simple example is the number 15 as 3 x 5), works in different systems of numbers, aiming to answer questions posed 200 years ago by Carl Friedrich Gauss, a German mathematician and physicist who made significant contributions to many fields in mathematics and science. “My work has shown that by combining perspectives from probability, geometry and topology, we can understand things about how factorization works across different number systems and how number systems can be enlarged by adding in new numbers," Wood said. “Research into foundational questions in mathematics is important because it tells us about our world and about new technologies it may lead to in the future.”

Wood is the sixth recipient from Harvard to receive the Waterman Award. She received her doctorate in mathematics from Princeton University in 2009.

“It is a tremendous honor to win the Waterman Award. Previous recipients include several of my ‘heroes,’ and it is amazing to be included in this group of scientific leaders,” Wood said. “This award will allow me to direct my research in some of the most potentially exciting, but also more speculative and boundary-pushing, directions in number theory.”

Nicholas Carnes first became interested in social science when he was in high school, thanks to his English teachers and forensics coach. His research explores the impacts of diversity on decision-making.

With support from an NSF doctoral dissertation improvement research grant in 2009, Carnes’s research delved deeply into how a person’s background affects whether they pursue public service. “I think my most significant contribution has been showing ways that a person’s situation can empower or limit their opportunities to get involved -- why people do, or do not, become involved in the decisions that affect their communities,” Carnes said.

“I’ve found that having a diverse set of people from different backgrounds and having different experiences inspires everyone to think more broadly about the impact that these decisions can have on our communities,” he explained.

Carnes is the second recipient from Duke University to receive the Waterman Award. He received his doctorate in politics and social policy from Princeton University in 2011 and joined the faculty at Duke's Sanford School of Public Policy the same year.

“This award is the greatest honor of my career,” Carnes said. “I hope to use this award to show the next generation of scholars that there’s real value in studying the decision to pursue public service and, more generally, that it’s okay to take healthy risks as a researcher.”

In addition to a medal, awardees each receive $1 million over five years for research in their chosen field of science. The Waterman Award will be presented to both recipients during the National Science Board virtual meeting, which will be held on May 18 and 19.

The award, established by Congress in 1975, is named for Alan T. Waterman, NSF's first director.