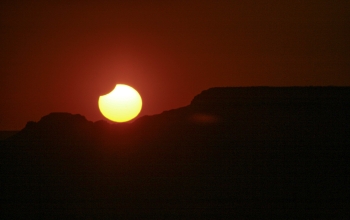 In preparation for the Ring of Fire Eclipse June 10, the U.S. National Science Foundation has compiled resources to assist with your reporting needs, including a list of subject-matter experts available for interviews and downloadable content.

For further assistance with B-roll package that contains full-resolution video and images of the sun contact media@nsf.gov.

David Boboltz has been a Program Director in the NSF’s Division of Astronomical Sciences since 2013.  His primary area of responsibility is the management of the division’s solar research facilities including the National Solar Observatory and the construction of NSF’s Daniel K. Inouye Solar Telescope on Maui, HI.  Prior to NSF, Boboltz worked as a research astronomer for the U.S. Naval Observatory for 15 years.

Carrie Black is currently the NSF Program Officer in Astronomical Sciences for Operations of the National Solar Observatory and oversees solar physics grants. On behalf of NSF, Black participates in the Space Weather Operations, Research, and Mitigation Interagency Working Group. She has also managed large and small facilities and several grants programs in Geospace Science. Prior to NSF, carried out solar and plasma physics research as an NSF and NASA Postdoctoral Fellow at NASA Goddard Space Flight Center.

Maria D. Kazachenko’s  research interests range from the storage of magnetic energy in solar active regions, to the release of that energy in solar flares with an emphasis of comparison and integration of observations with simulations. Kazachenko is also involved in the development of the Critical Science Plan for The Daniel K. Inouye Solar Telescope, the largest 4-meter solar telescope in the world, with the first light expected in early 2022.

Sanjay Gosain, obtained his Ph.D. from Udaipur Solar Observatory in India, which is one of the nodes of the NSO's GONG telescope network. Gosain transitioned to NSO as a Postdoctoral fellow on SOLIS/VSM magnetograph data where he helped in its calibration. He has worked on design and development of various solar instruments such as imaging polarimeters, Dopplergraphs, and narrowband filtergraphs. He participated in four total solar eclipses over his career. His research interests are study of magnetic field evolution in the solar active regions and their relationship with flares are CMEs.

Paul Bryans is a scientist at the National Center for Atmospheric Research's High Altitude Observatory. His research focuses on dynamic events in the solar atmosphere, and in particular, how mass and energy is transported from the lower atmosphere to the solar corona. Bryans used specialized instruments to observe the 2017 solar eclipse in the U.S. and the 2019 solar eclipse in Chile in an effort to better understand the structure of the Sun's magnetism.