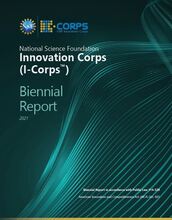 The U.S. National Science Foundation (NSF) has released a biennial report (2019-2020) on the efficacy of the Innovation Corps (I-Corps™) program. Read the full report on the NSF I-Corps website.

The new report details how I-Corps responds to four urgent national needs: training an entrepreneurial workforce, translating technologies, enabling economic impact, and nurturing an innovation ecosystem. I-Corps training and infrastructure together represent an important investment for NSF and the Nation, as directed by the American Innovation and Competitiveness Act (AICA), Public Law 114-329, Section 601.

The report also describes I-Corps partnership activities. NSF, the National Institutes of Health (NIH), and the Department of Energy (DOE) collaborate in identifying and addressing the evolving requirements of the program. Each agency shares in the common vision of empowering scientists to inform and accelerate their interactions with the marketplace; however, each agency implements I-Corps at a different stage of the journey from demonstration to validation. This rich collaboration has enabled the participating agencies to provide structured training, support venture launch at scale, and meet the Nation’s call for action.

More than half (1,000+) of participating NSF I-Corps teams have launched startups, which have cumulatively raised $760+ million in subsequent funding. The NIH teams are Small Business Innovation Research (SBIR)/Small Business Technology Transfer (STTR) bioscience awardees that have collectively raised $400+ million in subsequent funding. DOE-funded startups have raised $83 million in post-training funding. (Distribution of public and private funding is not available at the time of this report.)

The NSF is required to issue an I-Corps report every two years as directed by the American Innovation and Competitiveness Act (P.L. 114-329).