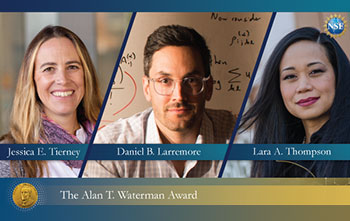 The U.S. National Science Foundation has named its awardees for this year's Alan T. Waterman Award, the nation's highest honor for early-career scientists and engineers: Jessica E. Tierney, a University of Arizona geoscientist; Lara A. Thompson, a University of the District of Columbia biomedical engineer; and Daniel B. Larremore, a computer scientist from the University of Colorado Boulder.

This is the first year NSF has chosen to honor three researchers with the award, which recognizes an outstanding early-career U.S. science or engineering researcher who demonstrates exceptional individual achievements in research in NSF-supported fields.

"It is a great pleasure to honor these three outstanding scientists with the Waterman Award," said NSF Director Sethuraman Panchanathan. "They have clearly demonstrated a superb record of scientific achievements by using creative and innovative approaches that have further strengthened basic research in their respective fields. We are grateful to all of our honorees for the vital role they play in advancing the scientific enterprise. I am thrilled to congratulate each of them and look forward to their tremendous accomplishments in the future."

Understanding how the Earth system works through paleoclimatology

Jessica E. Tierney, University of Arizona
“For outstanding advances in the reconstruction of past climate change and furthering the understanding of future climate change.”

As a high school student, Jessica Tierney knew that she was interested in majoring in science but didn't know which field until she started college. She enrolled in an introductory geology course that sparked her interest in Earth science. But not only that, her interest in history also helped to shape her future as a researcher, when she became interested in studying the history of Earth, more specifically paleoclimatology, which looks deeply into ancient climates to answer questions about what Earth's past climate was like and why.

Through her work, she tries to understand these ancient changes in climate, including quantifying changes in ocean temperature and the water cycle by using geochemical techniques. "Studying the past is important because it can narrow our projections for what climate will look like at the end of the century and what sort of impacts humans will face," Tierney added.

Using novel modeling techniques combined with paleoclimate data assimilation, she has generated groundbreaking maps of past climate conditions and the system dynamics that produced the conditions. Her research has redefined the understanding of global temperature changes in the geologic past and developed a new quantitative understanding of temperature and climate sensitivity to past levels of carbon dioxide.

NSF has been investing in climate change research for decades, enabling scientists to collect long-term, continuous data and observations. Tierney's research has been made possible through NSF's investments in investigations of the dynamics and complexity of Earth processes that piece together the entire puzzle of climate change and explore ideas for new, sustainable climate change solutions.

"It is an absolutely incredible honor to receive the Waterman Award. I am so humbled to share this recognition with leading researchers across all fields of science," said Tierney. "I'm really grateful to NSF for the support and I hope that my research will help society prepare for, and ultimately mitigate, human-caused climate change."

Tierney earned a bachelor's, master's and a doctorate in geology from Brown University. She is an associate professor at the University of Arizona where her work has received a great deal of recognition. Tierney is a Packard Foundation Fellow, an American Geophysical Union Fellow and a lead author on the Intergovernmental Panel on Climate Change Sixth Assessment report.

Understanding and mitigating the effects of loss of balance in people

Lara A. Thompson, University of the District of Columbia
“For pioneering innovations in rehabilitation engineering, discovering improved balance elicited by a vestibular prosthesis in primates with vestibular loss, and translation of basic science from her research towards engineering-based models and interventions to improve the lives of people suffering from balance, gait, and postural impairments.”

From an early age, Lara Thompson always enjoyed creating, building and problem-solving. She knew that she wanted to pursue a career related to human health and see the positive impacts her work had on people's lives. While in the Harvard-MIT Health Sciences and Technology doctoral program, Thompson became invested in work that combines engineering and medicine. She wanted to focus on prostheses or implants and was intrigued by the idea of using a vestibular, or inner ear, implant to help people with disequilibrium or problems with balance.

Thompson is recognized for her innovations in rehabilitation engineering and for translating her research on vestibular disorders in primates into engineering-based interventions for individuals with balance, gait and postural impairments. Her research, made possible in part by NSF investments, focuses on the effects of equilibrium loss on postural control and balance. Through her work, she investigates various assistive technologies and robotics aimed towards improving balance in elderly individuals and survivors of stroke, as well as how such technologies can increase balance confidence and reduce the risk of falling for these groups of individuals.

"Receiving the Waterman Award is a huge honor in that it is the most notable award in the United States for early career scientists and engineers," said Thompson. "Being the first award recipient from a historically Black college and university, and the first self-identified woman of color, while being a new mom, means so much to me."

Thompson's doctoral research was the first to demonstrate that a vestibular-based sensory prosthetic can improve the ability to maintain stable balance and posture during rapid head movements. At present, she investigates assistive devices, robotics and methodologies towards improving balance and reducing fall-risk in the rapidly growing aging population. The revolutionary approaches developed by Thompson are advancing the field of rehabilitation engineering and biomechanics towards improving the quality of life for mobility impaired populations.

"With this award, I can take my research a step further and explore various ideas and perhaps look into rehabilitation robotics and devices for veterans and amputees, which is another group that I am really interested in," said Thompson. "I hope I can give onlookers, in particular students, a source of both optimism and inspiration that they too can be future scientists and engineers and overcome any obstacles that they may face, to never give up and to ultimately achieve their dreams and career aspirations."

Understanding epidemics through the lens of mathematics

Daniel B. Larremore, University of Colorado-Boulder
“For foundational research in computational epidemiology, combining mathematics and computation with real-world data to create powerful new models that provide concrete, innovative, and useful answers to globally important questions in the study of epidemic dynamics, including timely research on vaccination and testing strategies for combatting the COVID-19 pandemic.”

Daniel Larremore is fascinated by the ways in which relatively simple and transparent mathematical models can support scientific discovery and policy, using math to track and understand the mechanisms by which human diseases spread. His early interest in mathematics was encouraged by enthusiastic lessons from his grandmother, herself a food chemist during World War II who later found her calling as a teacher.

As a master's student, it was again mathematics that drew him in, this time when he was introduced to research in a colloquium on the analysis of complex networks — frameworks to model power grids, terrorist networks, and the spread of ideas and diseases alike. Sparking an interest in interdisciplinary research, Larremore has since used networks, modeling and mathematics in a diversity of topics, from infectious diseases and epidemiology to social inequalities and algorithms for network analysis. Supported by NSF’s Science of Science program, Larremore’s research explored the productivity and progress of the U.S. scientific workforce, revealing new evidence on the impact of institutional hiring practices and how new ideas and innovations spread throughout the scientific community.

Larremore's work during the COVID-19 pandemic used the tools of computational epidemiology to answer urgent questions about pandemic countermeasures. How should the first doses of a scarce vaccine be targeted to minimize deaths or infections? What role could widely available rapid testing play in mitigating viral transmission prior to the arrival of vaccines? In his research, Larremore combined mathematics and computation with real-world data to create new models that provide answers to globally important questions like these.

"I am humbled. Receiving the Alan T. Waterman award is, simply put, the greatest honor of my career. It opens a door for me, with my students, to throw our best efforts at harder and harder problems in infectious disease modeling and network science," said Larremore. "At this stage in my career, it provides incredible momentum and serves as a challenge to continue to focus on the most meaningful problems I can find."

Larremore earned a bachelor's in chemical engineering from Washington University in St. Louis; a master's and doctorate in applied mathematics from the University of Colorado Boulder; and completed postdoctoral fellowships at the Harvard T.H. Chan School of Public Health and the Santa Fe Institute. He is currently working as an assistant professor at the University of Colorado Boulder in the department of computer science and the BioFrontiers Institute.

In addition to a medal, awardees each receive $1 million over five years for research in their chosen field of science. The Waterman Award will be presented to all recipients at a ceremony during the National Science Board meeting, which will be held in Washington, D.C., on May 5.

The award, established by Congress in 1975, is named for Alan T. Waterman, NSF's first director.