Moving towards a more robust, secure and agile Internet 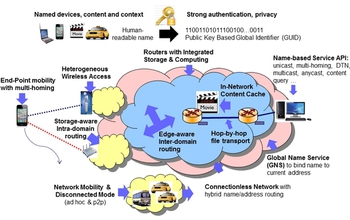 These pilot networks are designed to enhance security, respond to emerging service challenges and enable the scalability of the information infrastructure upon which Internet users increasingly rely.

The investments continue NSF's longstanding commitment to foundational research on Internet technologies. In particular, today's awards seek to build upon the success of projects that were initially funded in 2010 through the NSF Future Internet Architectures (FIA) program.

The objective of the new awards is to move the FIA efforts from the design stage to piloted deployments that assess how the designs work at large-scale and within challenging, realistic environments. Cities, non-profit organizations, academic institutions and industrial partners across the nation will collaborate with researchers to test the new designs.

"NSF-funded research has been instrumental in advancing network technologies, beginning with the first large-scale use of Internet technologies to link researchers to the nation's supercomputing centers through NSFNET and along the way, helping to transition the network into the self-governing and commercially viable Internet we know today," said Farnam Jahanian, head of the Computer and Information Science and Engineering Directorate at NSF.

"Through programs such as FIA, NSF is supporting research to envision the future of the Internet and to spur the design of fresh new ways of conceiving network technologies - ones that address the growing needs for robustness, security and dependability."

The proposed projects also consider the larger societal, economic and legal issues that arise from the interplay between the Internet and society.

"Our goal with FIA-NP is to support research that builds upon the tremendous success of the FIA projects to date," said Keith Marzullo, director for the Computer and Network Systems Division at NSF. "Specifically, we are seeking to take the existing FIA designs from early prototypes to more sophisticated architectures that are tested and evaluated via advanced prototypes in one or more relevant environments. These projects are just the beginning of what it would take to create a full scale Future Internet, but the ultimate goal is the design and deployment of a network that serves all the needs of society."

The three projects supported through the FIA-Next Phase (FIA-NP) are:

Deployment-Driven Evaluation and Evolution of the eXpressive Internet Architecture (XIA-NP), led by researchers at Carnegie Mellon University, with partners at the University of Wisconsin-Madison, Duke University and Boston University;

The solutions developed by each research group address the historic changes that have transformed the way the Internet is currently used, as well as the emerging trends that many believe will shape its future use.

"The Internet is at a historic inflection point, with mobile platforms and applications fast replacing the fixed-host/server model which dominated the Internet since its inception," said Dipankar Raychaudhuri, distinguished professor and director of WINLAB at Rutgers University and principal investigator for the MobilityFirst project. "This fundamental shift presents a unique opportunity to develop an efficient, robust and secure next-generation Internet architecture in which wireless devices and mobile applications are primary drivers of a new design."

The projects all have designed pilot versions of the new networks and tested them in limited settings. The groups have also gathered community input.

"The success of a new architecture requires broad community involvement and widespread experimentation across the world," said Lixia Zhang, lead researcher for the NDN project and professor of computer science at UCLA.

"NDN has built significant momentum through a commitment to a similarly open approach that has spurred substantial interests from both academia and industry. We are in the planning stage of establishing an industry consortium grounded in an open innovation model that aims to limit proprietary intellectual property claims on core elements of the architecture," Zhang said,

In the coming phase, each project will test how its system works in real-world settings. For instance, XIA's architecture will be tested in two network environments: a vehicular network deployment in the city of Pittsburgh and a large-scale video delivery environment.

The NDN project is partnering with Open mHealth, a non-profit patient-centric health ecosystem, and with UCLA Facilities Management, which operates the second largest Siemens building monitoring system on the West Coast.

MobilityFirst will be tested in three distinct network trial environments: a mobile data services trial with a wireless internet service provider (5Nines) in Madison, Wis.; a content production and delivery network trial involving WHYY and other public broadcasting stations in Pennsylvania and a context-aware public service weather emergency notification system with end-users in the Dallas/Fort Worth area.

"These deployments will leverage, and enable us to deepen, our work on secure network operations, including providing a highly available infrastructure and secure authentication mechanisms," said Peter Steenkiste, professor of computer science and electrical and computer engineering at Carnegie Mellon University and principle investigator for the XIA project. "They will enable us to build and test a robust XIA network, and establish best practices for using our architecture, including support for mobility and enhanced cybersecurity."

The expectation is not that any one of these architectures will replace the Internet wholesale. Rather, the proofs of concept will show a way beyond today's architecture that addresses current and emerging challenges, with components and aspects adopted by industry or the government.

"The Internet has been incredible in terms of its ability to evolve to enable all manners of different needs, from information distribution to collaborative work spaces. But we may be reaching a point at which new solutions and new infrastructure are needed," said Darleen Fisher, the NSF program officer who oversees the FIA-NP program.

"By supporting challenging new architectures, we expect the FIA-NP projects to create and sustain the intellectual capital needed for future innovations. Equally important, the FIA-NP projects will continue NSF's goal of training a new generation of researchers in exploring, designing and deploying large-scale networking systems."