Television That's Good for You 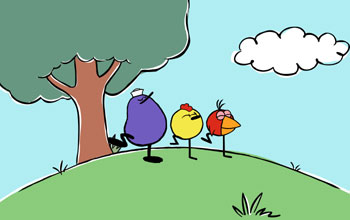 Characters Quack, Peep and Chirp (left to right) march to the beat of their own drum.

ARLINGTON, Va.—With huge audiences, popular websites and even vocal talent lent from Hollywood, educational programs are major players in the 2004 children's television season. Supported by the National Science Foundation (NSF), three of the most-viewed programs – ZOOM, Cyberchase and DragonflyTV – now share the airwaves with PEEP and the Big Wide World, a novel show that teaches toddlers to think like scientists.

"The response of children and parents to these popular TV programs sends a clear message. They want to watch intelligent, engaging and educational TV," says Barry Van Deman, section head for science literacy in NSF's Division of Elementary, Secondary and Informal Education.

Actress Joan Cusack narrates WGBH's PEEP, a show that breaks new ground by teaching toddlers basic science concepts and skills like measuring, comparing and estimating. Young viewers follow a baby chicken named Peep, a robin named Chirp and a duck named Quack as the cartoon friends investigate mysterious animal tracks, discover shadows, learn the truths of gravity and otherwise explore their world. The program also has two aspects that parents can appreciate: the animation is based on the original artwork of Oscar-nominated, Danish animator Kaj Pindal and the theme song is performed by Blues legend Taj Mahal.

Thirteen/WNET's Cyberchase also boasts star power, from Gilbert Gottfried to Christopher Lloyd. The mystery-adventure cartoon is a vehicle for teaching mathematics and problem-solving, with action centering around three kids and their avian sidekick Digit (voiced by Gottfried). The kids use mathematics to foil their nemesis, Hacker (voiced Lloyd), at times encountering new characters voiced by special guests including Jane Curtin, Jasmine Guy and Al Roker. Despite its cartoon adventure feel, the program content relies upon extensive research into how kids learn and perform mathematics. Now reaching a cumulative audience of nearly 5 million viewers each week, Cyberchase is among the top-rated PBS KIDS afternoon programs in many large markets.

Entering its sixth season, ZOOM, also produced by WGBH, engages kids in science and engineering activities. Based on the popular 1970s television series, ZOOM re-emerged in the late 1990s with a new focus on science. The show is hosted by a diverse group of seven kids who explore ideas submitted by viewers from across the country. After the television is turned off, kids can go to the ZOOM website with their families to learn how to do the day's experiments (and others) with common household items.

DragonflyTV, produced by Twin Cities Public Television, also encourages participation by kids, families and teachers by presenting a different experiment and scientific question during each show. Kids then submit their data online. Each weekly show introduces a new group of middle-school students from across the country as they conduct scientific investigations of favorite activities—from soccer-kicking experiments to studies of malformed frogs in back yards. New for Season 3, the show encourages young viewers to conduct a featured experiment from home each week, report data online, and ultimately learn the cumulative results on the next episode.

Cyberchase, ZOOM and DragonflyTV can be seen on public television stations across the country, and PEEP is available to viewers with cable or satellite service.