Variation in Vole Gene is Bellwether for Behavior 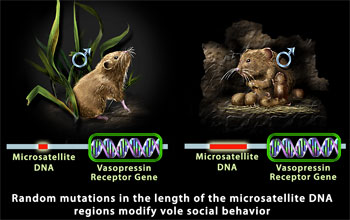 By studying small rodents called voles, researchers have discovered that slight variations in a DNA region once deemed "junk" actually predict social behavior and parental care giving in males. The differences in the DNA code, which show up over only a few generations by mutation, directly affect how, when and where the protein receptor for the hormone vasopressin presents itself in the brain.

According to Diane Witt, the National Science Foundation program manager for this work, "These studies are particularly important because they implicate key players and possible mechanisms underlying the evolution of species-specific social organization."

This research, published in the June 10 issue of the journal Science, was performed at the Yerkes National Primate Research Center of Emory University and the Atlanta-based Center for Behavioral Neuroscience by researchers Larry Young and Elizabeth Hammock.

"These findings suggest that these unstable genetic elements significantly contribute to the individual differences in social personality that we see in animals and humans," said Young.

The scientists extended the microsatellite investigation to primates by reviewing publicly available genome data. They discovered this same region was very similar in humans and bonobos. Bonobos, or pygmy chimpanzees, are known for their empathy and strong social bonds. In contrast, the microsatellite of the less-empathetic, more-aggressive common chimpanzee differed from humans and bonobos.

According to NSF's Witt, random mutations that result in variable lengths of DNA in microsatellite regions may represent unique opportunities for the expression of genetic adaptations that lead to behavioral diversity in a species.