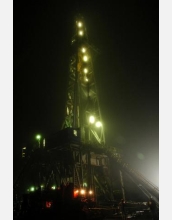 Geologists have drilled into the San Andreas Fault.

Note to broadcasters: B-roll of the SAFOD project site is available by contacting Dena Headlee, dheadlee@nsf.gov, (703) 292-7739.

Geologists affiliated with the EarthScope Project have successfully drilled a hole 2 miles deep into the San Andreas Fault, an 800-mile-long rift. The entire borehole will be lined with steel and concrete so sensitive instruments can be installed underground.

EarthScope is a National Science Foundation (NSF)-funded project carried out in collaboration with the U.S. Geological Survey.

"We now have the first opportunity to measure directly the conditions under which earthquakes begin and grow," said Herman Zimmerman, director of NSF's earth sciences division, which funds EarthScope. "This is an unprecedented step forward."

The borehole begins in the Pacific Plate just west of the fault. It passes through the active earthquake zone and ends in the North American Plate east of the fault. These enormous land masses constantly grind against one another in opposite directions, triggering earthquakes of various magnitudes up and down the fault.

A permanent underground observatory known as San Andreas Fault Observatory at Depth, or SAFOD, will be installed at the Parkfield, Calif., site for long-term monitoring in this earthquake-prone region. When completed in 2007, SAFOD will be the only observatory with instruments placed directly in an active fault zone where earthquakes form.

"With SAFOD, we will no longer be limited to interpreting earthquakes through layers of thick rock," said NSF EarthScope program director, Kaye Shedlock. "We can now directly measure the conditions under which earthquakes happen."

And, according to Gregory van der Vink, EarthScope project director, "SAFOD is critical to creating a comprehensive picture of how continents form."

SAFOD co-principal investigator and Stanford University geophysicist Mark Zoback said the physical and chemical processes that control earthquakes remain a mystery. "The observatory in the earthquake zone will allow us to measure these processes and answer basic questions about earthquake predictability," he said.

SAFOD will give researchers a unique window into the process of strain build-up and release in the fault zone during numerous "microearthquakes." Seismic instruments will be installed along both plates in a section of the fault where small earthquakes of magnitude 2.0 are frequent. While these microearthquakes usually aren't felt at the surface, they offer important clues about the origin of bigger, more destructive quakes. "Microearthquakes provide scientists with an exciting opportunity to study events that occur about every 2 years in roughly the same place," said Zoback.

Steve Hickman and William Ellsworth, SAFOD co-principal investigators with the U.S. Geological Survey, said the San Andreas fault is creeping at a rate of about 1 inch per year near the drill site. Most earthquakes occur in a zone no more than 10 yards wide.

This is the first time "we've been inside the earthquake machine," said Ellsworth. "We've looked at fossil earthquakes, we've made computer models, and we've made earthquakes in the laboratory. We've studied them from afar, but we've never before been where the action is."

Scientists now will be able to recreate the earthquake process in the laboratory using real materials and under real conditions that exist deep within the San Andreas Fault. "You can't do these kinds of in-depth measurements in parts of the fault that only produce big earthquakes, because those usually occur at intervals of 100 to 150 years," Hickman said.

In addition to retrieving fault zone rocks and fluids for laboratory analyses, intensive down-hole geophysical measurements and long-term monitoring will take place within and adjacent to the active fault zone.

"How and why plate boundary faults lose their strength [thus making them more earthquake-prone] is of great importance to understanding where plate boundaries form, and how they evolve," he said.