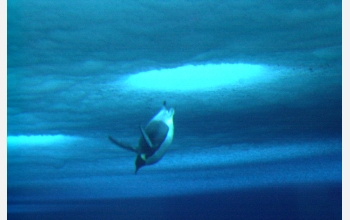 An Emperor penguin dives through a hole into the water below the McMurdo Sound sea ice.

For b-roll on Betacam SP format or in a high-definition format of Emperor penguins in Antarctica and Q's and A's with Emperor researcher Paul Ponganis, of the Scripps Institution of Oceanography, and Roberta L. Marinelli, NSF's biology and medicine program director, contact Dena Headlee, (703)292-7739, dheadlee@nsf.gov

To preview and request this video you may also log on to www.thenewsmarket.com/nsf. It is possible to both receive broadcast-standard video digitally or by tape from this site. Registration and video are free to the media.

Long before they lit up movie screens in animated feature films or enthralled documentary film audiences worldwide with the story of their endless struggle to survive and reproduce, Emperor penguins intrigued early Antarctic explorers.

As movie makers prepare this weekend to release "Happy Feet," about an animated Emperor who loves to dance, and the Hallmark Channel readies the cable-television premier of the documentary "March of the Penguins" on Sat., Nov. 25, 2006, the National Science Foundation (NSF) is making available B-roll of the penguins in Antarctica. The agency is also offering journalists the opportunity to ask Antarctic researchers questions about why the birds still challenge the scientific mind.

On the eve of International Polar Year (IPY), Emperor penguins, which can dive unharmed to depths that no human could survive unaided, still fascinate researchers.

By studying the animals' physiology and the way their bodies respond to the crushing pressure of deep dives, these NSF-funded scientists, who also are medical doctors, may one day provide clues to help improve surgical procedures and anesthesia. The study of Emperors also is very much in the spirit of NSF's IPY theme of attempting to understand what makes the processes of life in the cold and dark unique.

The video describes a fascination with Emperors that dates to the early 20th century. In the mistaken belief that Emperor penguin embryos might shed light on evolutionary links between reptiles and birds, three British explorers set out in 1911, pulling sleds through the unending blackness and almost unbearable cold of an Antarctic winter, to reach the penguins' nesting grounds at Cape Crozier to collect their eggs. An account of the expedition, "The Worst Journey in the World," became an undisputed classic of polar literature. "Antarctic exploration is seldom as bad as you imagine," wrote its author Apsley Cherry-Garrard. "But this journey has beggared our language: no words could express its horror."

Two eggs broke during the return journey. Three were preserved. But by the time the studies of the eggs were published in the 1930s, the hypothetical link between penguins and reptiles had been discounted. The eggs and embryos remain today at the Natural History Museum in London.

International Polar Year begins in March 2007, and will be devoted to advanced scientific exploration at the Earth's poles.