First use for underwater radio telemetry 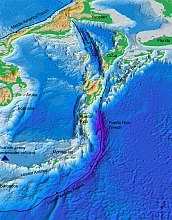 Kick'em Jenny and her new seismic gear are located just off the coast of the island of Grenada.

Kick'em Jenny is its name, and for oceanographers working in the southeastern Caribbean Sea, this undersea volcano has been a handful.

Now, a team of marine scientists funded by the National Science Foundation (NSF) and affiliated with the Woods Hole Oceanographic Institution (WHOI) may have figured out how to tame it. This week, the researchers will begin using radio telemetry to monitor the rumblings of Kick'em Jenny from a real-time seismic monitoring device installed on the volcano.

Located just off the north coast of the island nation of Grenada, Kick 'em Jenny is a "natural laboratory"--a submarine volcano that will eventually emerge from beneath the sea to form a new volcanic island. It is the only "live" submarine volcano in the West Indies, and has erupted at least 12 times since 1939. The last major eruption occurred in 2001.

Part of a project to develop new technology for earthquake monitoring in coastal areas, the seismic station, called a Real Time Offshore Seismic Station (RTOSS), uses an ocean-bottom seismometer deployed directly on the volcano. RTOSS allows seismic data to be transmitted by high-frequency radio to a land-based observatory in a nearby village. The data will reach the shore within milliseconds of being collected.

"This is the first time that radio telemetry has been used to transmit data from an underwater seismic monitoring station," said Rob Reves-Sohn, a WHOI geologist and RTOSS project leader.

Scientists will be able to observe the "inhaling and exhaling" of the volcano as it draws in and expels seawater, magma and superheated fluids.

The research team is coordinating its efforts with the National Disaster Management Agency in Grenada and the Seismic Unit of the University of the West Indies. The data will be incorporated into the regional monitoring network in the Lesser Antilles.

Funding for the project is also being provided by WHOI and the U.S. Geological Survey.