Discussion of report will be part of June 6-7 committee meeting in Big Sky, Montana 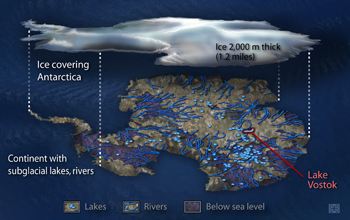 Scientists believe an aquatic system is buried beneath the Antarctica ice sheet.

The National Science Foundation (NSF) should work within the environmental framework of the international Antarctic Treaty system to develop a global scientific consensus on minimally disruptive ways to investigate one of the "last unexplored places on Earth"--a unique system of lakes, and the aquatic systems that may connect them, buried thousands of meters under the Antarctic ice sheet--according to a newly released report.

To avoid contaminating these lakes and other features, which scientists have only recently discovered and which have been cut off from the outside world for millions of years, the report calls for NSF to work with international scientific organizations and Treaty signatories to develop a management plan for any potential exploration efforts and, as part of that plan, "ensure that the environmental management of subglacial environments is held to the highest standards."

The report, "Exploration of Antarctic Subglacial Aquatic Environments: Environmental and Scientific Stewardship," was released in early May by the National Research Council of the National Academies of Science.

But before any efforts are made to take any samples, the report stresses, much more detailed surveys need to be made to catalogue the subglacial aquatic network and allow it to be afforded Treaty protection. Such a survey, while enabling the protecting of the entire system, would also allow for designating certain features more useful for scientific research and presenting less of a risk of widespread contamination of a subglacial "watershed."

NSF had requested guidance from the Academies on developing a set of environmental and scientific standards to guide scientifically responsible exploration. The report is the result of that request.

A subgroup of the Scientific Committee on Antarctic Research, called the Subglacial Antarctic Lake Environments (SALE) group, is scheduled to meet June 6 and 7 in Big Sky, Montana. John Priscu, a researcher at Montana State University, is organizing the meeting. A discussion of the report and its findings will be among the items on the agenda.

Ice-penetrating radar and other studies have identified more than 145 subglacial lakes under the ice of the southernmost continent, including one under the South Pole itself. The largest known is Lake Vostok, which has a surface area of roughly 14,000 square kilometers (5,400 square miles), making it roughly the size of Lake Ontario in North America.

Other studies have revealed that shallow, swamp-like features the size of several city blocks and layers of soils and broken rock may exist beneath the ice, adding to the diversity of subglacial aquatic environments. Scientific evidence further indicates that these environments comprise vast watersheds some of which appear to be connected by rivers and streams that flow freely beneath the ice sheet, which in most places is more than two miles thick.

"These lakes and their connected systems are among the last unexplored places on Earth," the report says. "Moreover, they have been sealed from free exchange with the atmosphere for millions of years, making it possible for unique microbial communities to exist."

In addition to the opportunity to study potentially unique microorganisms that have evolved in isolation for millions of years in extremes of cold and darkness, scientists are interested in these environments because sediments at the bottom of the lakes may contain evidence of past climate on the continent over millions of years and possibly even of a time before Antarctica was covered by ice.

This previously unknown system of aquatic features appears to be interconnected in many ways, the report notes, requiring that great care be taken in choosing which features to eventually explore in order to prevent accidentally contaminating an entire watershed.

But the 12-member expert panel that drafted the recommendations also recognized that in order to fully understand these unique environments it will eventually be necessary to sample the waters, most likely by drilling through the ice sheet to obtain the samples or introduce instruments.

"Direct exploration of subglacial environments is required if we are to understand these unique systems," the report states. "Exploration...should proceed and take a conservative approach to stewardship and management while encouraging field research."

Although previous drilling at Lake Vostok has reached to 120 meters above the place where ice and lake water meet, none of the Antarctic lakes has yet been breached. But plans are being actively pursued to explore more than one of Antarctica's lakes, with Russia having stated its intention to drill into Lake Vostok during the 2007-2008 Antarctic research season, which begins in the fall.

Under its program of grants for the International Polar Year 2007-2008 (IPY), NSF has funded genomic studies of microbes found in Lake Vostok, not from the waters themselves, but from the ice that melted and refrozen at the interface of the ice sheet above and lake waters below. Another IPY grant will support an airborne imaging system to map the lake. The White House Office of Science and Technology Policy has designated NSF as the lead U.S. agency for IPY.

In the Academies' report, the panel recommends that before any of the aquatic systems are penetrated that comprehensive surveys should be made to insure that scientists have identified and catalogued all of the existing subglacial lakes and drainage systems to understand how the complex system is connected and to identify the best potential research sites.

Once the features are identified and catalogued, they should then designated as specially protected areas under the Treaty to ensure that scientific activities can be managed within an international plan. Some of the features, it adds, should be designated as "exemplar pristine" environments and afforded additional environmental protection.

The panel recognizes that, as is typically the case with spacecraft that visit other planets, it is likely impossible to insure that physically entering the lake with drills and other probes will not introduce contaminants. It therefore recommends that any effort to physically explore the lake be restricted to introducing concentrations of microbes that are less than those that naturally occur as microscopic life transported from other parts of the globe travel down through the ice sheet and into the waters below.

Even so, the report recommends that "investigators should make every effort practicable to maintain the integrity of lake chemical and physical structure during exploration."