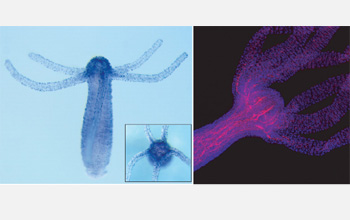 Opsin genes (pictured in blue) offer the first evidence of sight in animals.

By peering deep into evolutionary history, scientists have discovered the origins of photosensitivity in animals: vision genes called opsins that first appeared in the aquatic animal species Hydra magnipapillata.

The hydras have no eyes or light-receptive organs, but they have the genetic pathways to be able to sense light.

The findings are published in this week's issue of the scientific journal PLoS ONE.

The biologists--David Plachetzki and Todd Oakley of the University of California at Santa Barbara--are the first to look at light receptive genes in cnidarians (corals, jellyfish and sea anemones), of which hydras are members.

Hydras are found in most freshwater ponds, lakes and streams in temperate and tropical regions, and are predatory animals that feed on small aquatic invertebrates.

The scientists speculate that hydras use light sensitivity in order to find prey. The hydras have opsin proteins all over their bodies, but the proteins are concentrated in the mouth area.

"These results are significant to advancing our understanding of the early evolution of sight in animals, and show how simple genetic changes can produce visual pigments that begin the pathway to the evolution of sight," said Jerry Cook, program director in NSF's division of environmental biology, which funded the research.

Oakley said that there are only a handful of cases where scientists have documented the very specific mutational events that have given rise to new features during evolution.

"We show very clearly that these changes in a particular duplicated gene, opsin, allowed the new genes to interact with different proteins in new ways," he said. "Today, these different interactions underlie the genetic machinery of vision."

Scientist Bernie Degnan of the University of Queensland in Brisbane, Australia, provided bioinformatics tools to complete the study. The Hydra magnipapillata genome project is conducted by the Institute for Genomic Research, part of the J. Craig Venter Institute.