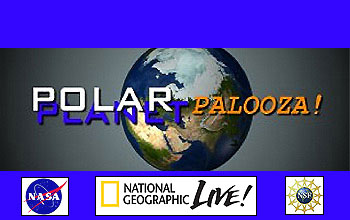 As part of a national tour of science museums and science centers, "Polar-Palooza: Stories From a Changing Planet," an educational initiative supported jointly by the National Science Foundation (NSF) and the National Aeronautics and Space Administration (NASA), comes to the National Geographic Society in Washington, D.C., on March 13th.

Polar-Palooza is an immersive multimedia presentation featuring original high-definition video clips, polar artifacts, soundscapes and still photographs -- along with engaging stories from some of the country's leading polar experts -- designed to focus public attention on, and help to explain to a general audience, the effects on the polar regions of global climatic changes.

Members of the news media are invited to attend the March 13th event, which begins at 7:30 p.m., at the National Geographic building at 1600 M St., N.W. Polar scientists participating in this event will be available for interviews earlier in the day--between noon and 2 p.m.--at the M Street location. Earlier still, media can observe a Polar-palooza workshop involving scientists and students in grades 6 to 10, beginning at 10:30 a.m.

NSF and NASA have funded the producers of Polar-Palooza to capture images and video of scientific field work in the Arctic and Antarctic, and created the national tour as part of their contributions to the International Polar Year (IPY) 2007-2008, a global scientific campaign involving research, field work and satellite observations by scientists from 60 nations. NSF is the lead federal agency for IPY.

Polar-Palooza is produced by Passport to Knowledge, of Morristown, N.J., as an integral part of IPY outreach efforts.