NSF to Bestow Waterman Award to UCLA's 'Mozart of Math' 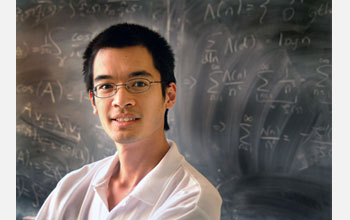 Terence Tao in the classroom

The National Science Foundation (NSF) is proud to announce that 32-year-old Terence Tao, a professor of mathematics at the University of California at Los Angeles, will receive its 2008 Alan T. Waterman Award. Called a "supreme problem-solver," and named one of "the Brilliant 10" scientists by Popular Science (October 2006), Tao's extraordinary work, much of which has been funded by NSF through the years, has had a tremendous impact across several mathematical areas. He will receive the award at a black tie dinner program at the U.S. Department of State on May 6.

Terence Tao was born in Adelaide, Australia, in 1975. His genius at mathematics began early in life. He started to learn calculus when he was 7 years old, at which age he began high school; by the age of 9 he was already very good at university-level calculus. By the age of 11, he was thriving in international mathematics competitions. Tao was 20 when he earned his doctorate from Princeton University, and he joined UCLA's faculty that year. UCLA promoted him to full professor at age 24. Tao now holds UCLA's James and Carol Collins Chair in the College of Letters and Science. He is also a fellow of the Royal Society and the Australian Academy of Sciences (corresponding member).

Nicknamed "the Mozart of Math," Tao's areas of research include partial differential equations (PDE), combinatorics, number theory and harmonic analysis. Harmonic analysis is an advanced form of calculus that uses equations from physics. Some of this work involves, in a colleague's words, "geometrical constructions that almost no one understands." Tao also works in a related field, nonlinear partial differential equations, and in the entirely distinct fields of algebraic geometry, number theory and combinatorics, which involves counting.

In addition to the prestigious Waterman award, Tao has received a number of other awards, including the Salem Prize in 2000; the Bochner Prize in 2002; the Fields Medal, often touted as the "Nobel Prize for Mathematics" and SASTRA Ramanujan Prize in 2006; and the MacArthur Fellowship and Ostrowski Prize in 2007.

Through the years, Tao's research has often been funded by other NSF grants. His current research is funded by NSF Award #0649473, "Global Behaviour of Critical Nonlinear PDE."