Lifelong achievements in science and engineering to be recognized at May 6 ceremony in Washington, D.C. 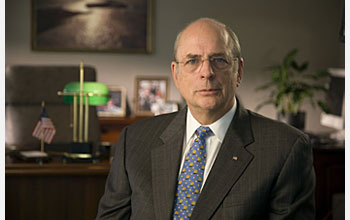 The National Science Board (NSB) today announced that Norman R. Augustine will receive its 2008 Vannevar Bush Award for his distinguished public service leadership in science, engineering and technology; for his longstanding commitment to the ethical conduct of business and the engineering profession; and for his extraordinary contributions to the welfare of the nation through his advocacy of science, technology and engineering education as national priorities. The NSB will honor Augustine at a black-tie dinner ceremony on May 6 at the U.S. Department of State.

NSB is the 24-member policy-making body of the National Science Foundation (NSF) and advises the president and Congress on matters of U.S. science and engineering policy. Each year, the NSB presents the Vannevar Bush Award to an individual whom, through public service activities in science and technology, has made an outstanding "contribution toward the welfare of mankind and the nation."

"Norm Augustine has served as a superior leader in science, technology and engineering; performed tremendous service to the U.S. government, private industry and scientific enterprise," said Board Chairman Steven Beering. "He's made exceptional contributions to advancing the nation."

Augustine has demonstrated ethical and responsible leadership throughout his distinguished career, most recently in the private sector, and prior to that in government. He played a prominent role in the 1995 merger of Martin Marietta and Lockheed, one of the largest aerospace and defense mergers in history. He had first served as vice president of aerospace technical operations and then director at Martin Marietta Corporation. Most recently he was chief executive officer and chairman of the board of the Lockheed Martin Corporation. He retired from his management roles in 1998, but remained an active director until 2005. He was also a professor at Princeton University, his alma mater.

Prior to his work in corporate America, Augustine applied his science and technology talents in key government positions under two U.S. presidents. He served as assistant secretary for research and development of the Army from 1973 to 1975, and then undersecretary of the Army from 1975 to 1977.

The Bush Award will be in good company among Augustine's honors. He was presented the National Medal of Technology by the president of the United States and received the Joint Chiefs of Staff Distinguished Public Service Award. He has five times received the Department of Defense's highest civilian decoration, the Distinguished Service Medal. He is co-author of The Defense Revolution and Shakespeare In Charge and author of Augustine's Laws and Augustine's Travels.

Augustine's current and past contributions to corporate, nonprofit and university boards are numerous. He is a current member of the board of directors of ConocoPhillips and Black & Decker, and has recently retired from the board of Procter & Gamble.

He holds 22 honorary degrees and was selected by Who's Who in America and the Library of Congress as one of "Fifty Great Americans" on the occasion of Who's Who's 50th anniversary.