West African Droughts are the Norm, not an Anomaly

Some droughts lasted centuries in the past, and a warming planet may make future droughts more devastating 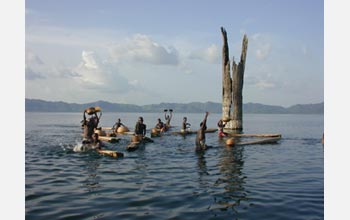 Large tropical trees stand where they once grew during severe droughts in Ghana.

Listen to an audio file of Timothy Shanahan, Jonathan Overpeck and Paul Filmer discussing the findings with reporters.

A new study of lake sediments in Ghana suggests that severe droughts lasting several decades, even centuries, were the norm in West Africa over the past 3,000 years.

The earlier dry spells dwarfed the well-documented drought that plagued West Africa in the late-20th century, and as the planet warms, the study's authors believe the region's rainfall patterns will have an even greater impact.

The team of geoscientists and climate scientists, led by Jonathan Overpeck of the University of Arizona and his former doctoral student, lead author Timothy Shanahan, who is now at the University of Texas (UT) at Austin, announced their findings in the April 17, 2009, issue of Science.

Because of close agreement amongst several data sets, the scientists believe the droughts are driven in part by circulation of the ocean and atmosphere in and above the Atlantic--and possibly beyond. If climate models for such circulation patterns hold true, the study suggests global warming could create conditions that favor extreme droughts.

"Clearly, much of West Africa is already on the edge of sustainability," says Overpeck, "and the situation could become much more dire in the future with increased global warming."

The findings emerged from sediments that lie at the bottom of Lake Bosumtwi in Ghana, deposits of soil and organic matter that contain annual bands of light (winter) and dark (summer) layers that stretch back more than three millennia.

"Lake Bosumtwi is really unique in that its one of the few locations in tropical West Africa where varves, annual sediment layers, are preserved. This allows us to look at changes in climate at very high resolution," said Shanahan, now an assistant professor at UT.

Added Overpeck, "The instrumental record of climate is just too short to understand how climate changes in Africa, and the lake sediments provide a fantastic way to put the short instrumental record--including the iconic Sahel Drought of the late 20th century--into a much longer perspective."

"Support for our geochemical interpretations also came from evidence for past lake stands during drought periods, including a partially submerged forest, which grew during a century-long drought only a few hundred years ago when the lake was much lower," added Shanahan.

The researchers correlated the oxygen record from their sediment cores with concentrations of elements such as aluminum, potassium, silicon and iron that come from broken-down minerals in soil. The elements reveal drought conditions because during dry periods, the lake became smaller, exposing more soil and enabling it to wash in, and increasing the concentrations of the soil elements.

The resulting data sets show periods of dryness, particularly droughts in the 30-40 year range, that correlate to fluctuations in sea surface temperatures, a pattern called the Atlantic Multidecadal Oscillation (AMO). The oscillation has never been confirmed over long time periods, but computer simulations and several data sets, including tree-ring variations from sites around the West Atlantic, have hinted at the scenario.

"More and more, it's starting to look like the AMO is a big player affecting climate change around the Northern Hemisphere, including drought variability over Western Africa and western North America," noted Overpeck

No existing evidence for the AMO had the breadth of the 3,000-year column of lake sediments that the new study includes. While the new data also may reflect some patterns resulting from other sea surface temperature patterns, such as Atlantic Niños and even the familiar El Niño events in the Pacific, the AMO correlation is the strongest and holds promise as a leading cause of the West African droughts.

The lake's sediment record is also punctuated by less frequent, but much more severe, century-long drought events. Because of the size and duration of those events, their impact would have been much more severe than the multi-decade droughts linked to the AMO.

"What's disconcerting about this record is that it suggests the most recent drought was relatively minor in the context of the West African drought history," said Shanahan. "If we were to switch into one of these century-scale patterns of drought, it would be a lot more severe, and it would be very difficult for people to adjust to the change."

As global temperatures increase, the oceanic and atmospheric circulations that control the AMO may change. The new study suggests such changes could lead to conditions that in the past three millennia caused the most severe droughts, and because of global warming, the droughts could be even hotter when they return.

"To reduce uncertainties, current climate models need more data from both high- and low-latitude field work, and from periods that extend back well beyond the instrumental record," said Paul Filmer, the NSF program director who funded the recent study. "This project is a good example of how work in the tropics on sediment records provides more detailed insight into climate patterns that affect millions of people in a highly vulnerable area of the world."