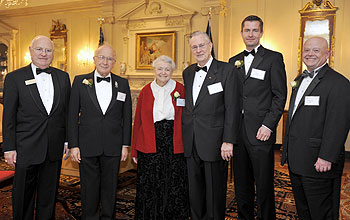 Many of the nation's top scientists, engineers and policy makers gathered last week for at the annual awards dinner of the National Science Foundation (NSF) and the National Science Board (NSB) to pay tribute to the achievements and public service contributions of three outstanding scientists, as well as a program designed to inspire and train future generations of scientists.

NSB Chairman Steven Beering presided over the evening. John Holdren, director of the Office of Science and Technology Policy at the White House and science advisor to the President, shared with the 250 member audience a letter from President Obama in which he sent warm greetings and identified the role of science as more important than ever before to help address the world's pressing challenges.

NSF Director Arden L. Bement, Jr. presented the highest honor conferred by the NSF, the Alan T. Waterman Award, to David Charbonneau, the Thomas D. Cabot Associate Professor of Astronomy at Harvard University. Bement called the 34-year-old Charbonneau "a youthful leader in a field of rapidly growing importance to astrophysics: the study of planets orbiting other stars--exoplanets." Bement paraphrased comments from Charbonneau's colleagues, one of whom "called Charbonneau 'the brightest light in this rapidly growing discipline'" and another noted that "'achieving just one or two of his many breakthroughs would have listed Charbonneau at the forefront of his peers and deserving of this award.'"

With hopefulness, Bement referenced Charbonneau's current NSF-funded research on transiting planets around dwarf stars, "David is only on the cusp of larger discoveries in his field. This research has the potential to jump-start yet another new field of research within astrophysics, possibly leading to stunning breakthroughs in astrobiology."

Next, Kathryn Sullivan, NSB's chairman of the Vannevar Bush Committee, presented Mildred Dresselhaus, Institute Professor at the Massachusetts Institute of Technology, with the NSB's Vannevar Bush Award for her outstanding "contribution toward the welfare of mankind and the nation." Dresselhaus was honored for her leadership through public service in science and engineering, her perseverance and advocacy in increasing opportunities for women in science, and for her extraordinary contributions in the field of condensed-matter physics and nanoscience.

Shortly after earning her doctorate at a time in which women composed just 2 percent of doctorate holders, Dresselhaus became the first physicist to use materials like carbon and graphene, a decision for which she thanks her husband, Gene Dresselhaus, a fellow scientist and trusted adviser, as well as her desire to try something new.

"I wanted to do something different. I didn't want to do what everyone else was doing," she revealed. She thanked NSF for funding the "research that no one else will fund, that sometimes enables the development of new fields of research."

Jo Anne Vasquez, chairman of NSB's Public Service Awards Committee, presented the two 2009 Public Service Awards, to an individual, and to an organization. Roald Hoffmann, professor emeritus at Cornell University, was recognized for his extensive, broad-reaching and diverse contributions to increasing public understanding of science and, more specifically, fostering appreciation of the relevance of chemistry to culture.

The American Chemical Society's (ACS) Project SEED (Summer Experiences for the Economically Disadvantaged) summer research program was spotlighted for meeting its two goals: fostering interest in science as a career and encouraging achievement in science, mathematics, and engineering among high school students from economically disadvantaged backgrounds.

In comments shared with those at the next day's NSB meeting, ACS President Tom Lane recounted SEED alumni statements through the years. "Many obstacles have been in my way since I arrived in this country, but the SEED experience helped me to be prepared for the world, and gave me an insight on what life as a chemist would be like," said immigrant and Project SEED Alumnus Anja Garcia. "The Project SEED program has not only given me the opportunity to discover my passion for chemistry, but it has given me the means to pursue it. The experience of working in a real laboratory, doing real science, has prepared me for college more than anything else would have," said Josh Peterson, 2007-2008 Project SEED student, now studying chemistry at the Colorado School of Mines. And in the words of 2001-2002 SEED student Julius Johnson, "No matter what direction I take in life, even if its away from a career in chemistry, I will still have a love, passion and deep respect for chemistry, the giants whose shoulders we stand on, and those who continue to propagate the importance of an education in the sciences."

NSF and the NSB encourage nominations for its 2010 awards. Those interested may visit the Web sites listed under related links below.