Secrets of the Four Chambers Revealed by Reptile Hearts 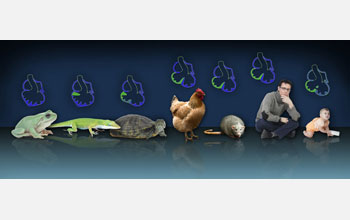 The first genetic link in the evolution of the heart from three-chambered to four-chambered has been found, illuminating part of the puzzle of how birds and mammals became warm-blooded.

Turtles are a curious transition--they still have three chambers, but a wall, or septum is beginning to form in the single ventricle. This change affords the turtle's body blood that is slightly richer in oxygen than the frog's.

Birds and mammals, however, have a fully septated ventricle--a bona fide four-chambered heart. This configuration ensures the separation of low-pressure circulation to the lungs, and high-pressure pumping into the rest of the body.

As warm-blooded animals, we use a lot of energy and therefore need a great supply of oxygen for our activities. Thanks to our four-chambered heart, we are at an evolutionary advantage: we're able to roam, hunt and hide even in the cold of night, or the chill of winter.

But not all humans are so lucky to have an intact, four-chambered heart. At one or two percent, congenital heart disease is the most common birth defect. And a large portion of that is due to VSD, or ventricular septum defects. The condition is frequently correctable with surgery.

Benoit Bruneau of the Gladstone Institute of Cardiovascular Disease has honed into the molecular forces at work. In particular, he studies the transcription factor, Tbx5, in early stages of embryological development. He calls Tbx5 "a master regulator of the heart."

Scott Gilbert of Swarthmore College and Juli Wade of Michigan State University study evolutionary developmental biology of turtles and anole lizards respectively. When Bruneau teamed up with them, he was able to examine a wide evolutionary spectrum of animals. He found that in the cold-blooded, Tbx5 is expressed uniformly throughout the forming heart's wall. In contrast, warm-blooded embryos show the protein very clearly restricted to the left side of the ventricle. It is this restriction that allows for the separation between right and left ventricle.

Interestingly, in the turtle, a transitional animal anatomically--with a three-chambered, incompletely septated heart, the molecular signature is transitional as well. A higher concentration of Tbx5 is found on the left side of the heart, gradually dissipating towards the right.

Bruneau concludes: "The great thing about looking backwards like we've done with reptilian evolution is that it gives us a really good handle on how we can now look forward and try to understand how a protein like Tbx5 is involved in forming the heart and how in the case of congenital heart disease its function is impaired."

The journal Nature reports the finding in its Sept. 3 issue. The National Science Foundation supports the research.