Climate Change Triggered Dwarfism in Soil-Dwelling Creatures of the Past 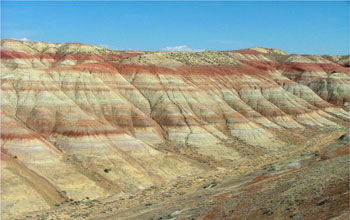 Ancient soil-inhabiting creatures decreased in body size by nearly half in response to a period of boosted carbon dioxide levels and higher temperatures, scientists have discovered.

The researchers' findings are published in the October 5, 2009, early online edition of the journal Proceedings of the National Academy of Sciences (PNAS).

Jon Smith, a scientist at the Kansas Geological Survey, and Stephen Hasiotis, a geologist at the University of Kansas, have demonstrated that soil-inhabiting creatures contracted in size by 30-46 percent during the Paleocene-Eocene Thermal Maximum (PETM).

The PETM was a short interval 55 million years ago marked by a spike in the atmosphere's carbon dioxide levels and global temperatures, conditions being repeated on Earth now.

The study is the first to establish that soil biota experienced a loss in size similar to mammals, which were reduced in size by as much as 50 percent during the PETM.

"The discovery that up to 50 percent of the body size reduction during the PETM was not just restricted to mammals, but also affected soil-dwelling organisms, has broad implications that may be very significant to understanding modern climate change and its impending effect on life," said H. Richard Lane. Lane is a program director in the National Science Foundation (NSF)'s Division of Earth Sciences, which funded the research by Hasiotis and colleague Mary Kraus at the University of Colorado.

"In our initial hypothesis, we thought that there would be no response to climate change, that the animals would be protected because they're underground," said Hasiotis.

"We also proposed that there would be minimal and protracted change or some sort of a delayed response. Instead, we find that they did experience the same kind of change as vertebrates living during the same period."

The soil-dwelling organisms examined by Smith and Hasiotis are ancient relatives of modern ants, cicadas, dung beetles, earthworms and crayfish.

To establish their findings, the researchers examined trace fossils, or the burrows, nests, tracks, trails and borings of organisms preserved within the Willwood Formation, a thick sequence of mudstones and sandstones in Wyoming's Bighorn Basin.

They found that diameters of burrows and other traces were smaller during the PETM, suggesting that the soil-inhabiting organisms that had created the traces were correspondingly lesser in size.

The scientists say that their results foreshadow biological outcomes that may result due to the planet's current jump in carbon dioxide concentration and temperatures.

They suggest that museum collections of insects compiled over the last few hundred years should be studied to determine whether body sizes of modern insects are indeed getting smaller.

"The PETM is seen as a good analog for modern climate change because it's occurring at roughly the same speed and magnitude," said Smith.

"The take-home lesson is that there can be cascading effects that ripple through an ecosystem when you change just one aspect. Modern climate change can have many effects that aren't going to be as immediately visible as sea-level change.

"We could be changing soil conditions over vast portions of the world and affecting the soil organisms themselves--and that will impact our own agriculture."

The researchers attribute dwarfism in soil-dwelling creatures to faster rates of development in individuals, along with decreasing life spans.

"The soil biota evolved for certain soil temperatures and conditions--and for this geologically brief period of time, those conditions were changed," Hasiotis said. "They probably were adapting to those warmer conditions by having a smaller body size."

During their time in the Bighorn Basin, a typical day in the field for the researchers involved digging shoulder-width trenches that were a meter or so deep and several meters tall, then searching the soil for specific geometric shapes indicating ancient nests, cocoons and burrows.

"For each individual trace fossil, we'd measure the diameter," said Smith. "We'd compare like trace fossils from rocks that occurred before the PETM event, within the event, and after the event. Then we'd look for changes in those diameters through time."

"We were surprised to find that they were in fact smaller through the PETM."