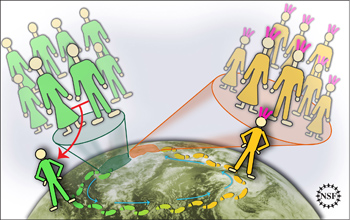 In this schematic representation, garb is a proxy for social behavior.

View an interview with researcher Adrian Bell of the University of California Davis.

Socially learned behavior and belief are much better candidates than genetics to explain the self-sacrificing behavior we see among strangers in societies, from soldiers to blood donors to those who contribute to food banks. This is the conclusion of a study by Adrian V. Bell and colleagues from the University of California Davis in the Oct. 12 edition of Proceedings of the National Academy of Sciences.

Altruism has long been a subject of interest to evolutionary social scientists. Altruism presents them with a difficult line to argue: behaviors that help unrelated people while being costly to the individual and creating a risk for genetic descendants could not likely be favored by evolution, at least by common evolutionary arguments.

The researchers used a mathematical equation, called the Price equation, that describes the conditions for altruism to evolve. This equation motivated the researchers to compare the genetic and the cultural differentiation between neighboring social groups. Using previously calculated estimates of genetic differences, they used the World Values Survey (whose questions are likely to be heavily influenced by culture in a large number of countries) as a source of data to compute the cultural differentiation between the same neighboring groups. When compared they found that the role of culture had a much greater scope for explaining our pro-social behavior than genetics.

In applying their results to ancestral populations, the World Values Survey was less useful. But ancient cultural practices, such as exclusion from the marriage market, denial of the fruits of cooperative activities, banishment and execution happen now as they did then. These activities would have exerted strong selection against genes tending toward antisocial behavior, and presumably in favor of genes that predisposed individuals toward being pro-social rather than anti-social. This would result in the gene-culture coevolution of human prosocial propensities.

Bell is currently continuing his research in Tonga, where he is planning through ethnography to estimate statistically what social learning behaviors people have in general that may explain the distribution of cultural beliefs across the Tongan Islands. He is developing a survey instrument that will help capture people's cultural beliefs and measure the effect of migration on the similarities and differences between populations.

This research is supported by the National Science Foundation's directorate for social, behavioral and economic sciences.