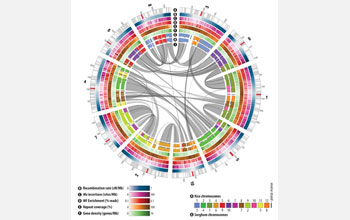 The completion of a high-quality sequence of the maize (corn) genome is announced in the cover story of the November 20, 2009, issue of Science.

This new genome sequence reports the sequence of genes in maize and provides a detailed physical map of the maize genome. This map identifies the order in which genes are located along each of maize's 10 chromosomes and the physical distances between those genes.

Additional information provided by the new maize genome sequence includes the locations on chromosomes of interesting, repeated sections of DNA (called centromeres) that are responsible for the faithful inheritance of those chromosomes by daughter cells during cell division.

This new genome sequence represents a major watershed in genetics because it promises to: 1) advance basic research of maize and other grains and 2) help scientists and breeders improve maize crops, which are economically important and serve as globally important sources of food, fuel and fiber. Resulting improved strains of maize may, for example, produce larger yields, show resistance to disease, offer efficiencies in nitrogen use that would enable farmers to reduce applications of costly, polluting fertilizers, and tolerate changes in rainfall or temperature accompanying climate change.

The research team and its funding

The new maize sequence was produced by a consortium of researchers that was led by the Genome Sequencing Center (GSC) at Washington University in St. Louis, Mo., and included the University of Arizona, Iowa State University and Cold Spring Harbor Laboratory in New York. This sequencing project was part of a joint Department of Energy/Department of Agriculture (USDA)/ National Science Foundation (NSF) effort that was funded by NSF under the auspices of the National Plant Genome Initiative (NPGI).

The NPGI, which began in 1998, is an ongoing effort to understand the structure and function of all plant genes at levels from the molecular and organismal to interactions within ecosystems. The NPGI focuses on plants of economic importance and plant processes of potential economic value.

"Production of a high quality maize genome sequence was a high priority for the NPGI from the beginning," said Jane Silverthorne of NSF. "This accomplishment builds on technological advances and basic research into maize biology that were essential to the design of the most cost-effective strategy to assemble and anchor the genes onto the genetic and physical maps."

Accompanying the announcement of the new maize genome sequence in the November 20, 2009 issue of Science is a "Perspective" on the sequence. The same Science issue also announces the results of two other NPGI-funded studies that were enabled by the new maize sequence. One of these studies produced a so-called HapMap of the maize genome, which describes the genetic differences between various strains of maize that are currently bred around the world. This resource will help researchers identify the genes that control various maize traits. The HapMap was produced by a team led by Edward S. Buckler of the USDA and Cornell University and Doreen H. Ware of the USDA and Cold Spring Harbor Laboratory.

The other NPGI-funded study that also appears in the November 20, 2009 issue of Science builds on the new maize genome sequence by identifying a surprisingly widespread biological process that determines the level of expression of certain genes present in hybrid strains of maize. This study was produced by a team led by Patrick S. Schnable of Iowa State University.

"Sequencing the corn genome provides scientists with new information and tools to access the vast array of genes available to improve corn," said Kay Simmons of the USDA's Agricultural Research Service. "This new sequence information can be exploited to translate basic discoveries to the field for the benefit of corn growers, the corn industry, and consumers."

Rick Wilson, lead investigator and director of the GSC, adds: "The new maize sequence will pave the way for the development of maize breeding programs that will improve the quality and quantity of maize crops, and thereby benefit people living throughout the world."

The November 20, 2009, issue of Science also reports on the sequencing by a Mexican consortium led by Luis Herrera-Estella of CINVESTAV, Irapuato, Mexico of the popcorn variety Palomero toluqueño, which is bred in central Mexico. Comparisons between Palomero toluqueño and the NSF-funded genome sequence, which is from a maize strain that is inbred in mid-western regions of the U.S., reveals important clues about how maize has been domesticated over the last 10,000 years and highlights the importance of biodiversity.

Significance of sequence for research

This new maize sequence provides significant refinements over the draft sequence that was announced in February 2008. These refinements include the elimination of redundancy and improvements in the ordering and orientation of chromosomal segments.

Because maize has served as a model plant for basic genetics research for the last 100 years, the completion of its genome sequence has important implications for basic research--as already evidenced by the immediate publication of the two companion papers in Science. In addition, the November 20, 2009 issue of PLoS Genetics features an editorial on the new maize sequence and ten more companion studies--each of which either provides background information on the development of the maize sequence or uses the new maize sequence to produce additional insights into maize genetics. In addition to advancing research on maize, the maize genome sequence is also expected to advance other cereal genome sequencing projects, such as those for wheat and barley.

The complexity of the maize genome is also partly due to the fact that about 85 percent of its DNA is composed of transposable elements--segments of DNA that can move between locations. "Transposable elements are found in all organisms, but were discovered in maize by Nobel Prize winner Barbara McClintock more than 60 years ago," said Rob Martienssen of Cold Spring Harbor Laboratory. "It is a remarkable achievement to be able to visualize these elements in such detail in the genome sequence."

An easy-to-understand explanation of McClintock's discovery and a photo of an ear of corn that was grown by McClintock at Cold Spring Harbor in 1949 (see photo) are included in an eye-catching poster about maize genetics that accompanies the Science paper announcing the new maize genome. (A link to the poster is provided below.)