Ice Cold: Cooler Than Being Cool 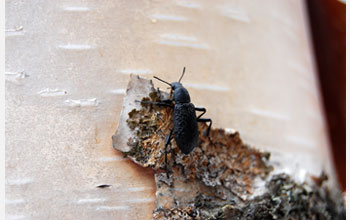 Water expands when it freezes. Anyone who has ever left a can of soda or bottle of water in the freezer too long has witnessed this first hand. So how do plants and animals survive severe temperatures?

Insects exposed to subzero temperatures can adapt to the extreme climate to survive freezing temperatures, but until now, antifreeze molecules had not been isolated from freeze-tolerant animals. The NSF-supported study, published in the November 24 issue of Proceedings of the National Academy of Sciences, describes a brand new type of antifreeze molecule isolated from a freeze-tolerant Alaskan beetle by Kent Walters and colleagues at the University of Notre Dame.

Interestingly, the antifreeze molecule described by the research team differs from previously described factors in that it is not a protein, but a combination of saccharides and fatty acids, which are other types of biomolecules. What does that mean? Size is one big difference. The exact size of this particular molecule is unknown, but the fact that it is small could prove beneficial. The chemical composition of the molecule could prove amenable to commercial production because small chains of sugars can be readily synthesized in the laboratory, making them cheaper and easier to manufacture than biologically assembled molecules.

Antifreeze molecules are present in many organisms including fish, insects, plants, fungi and bacteria. "The most active known antifreeze proteins had been described in freeze-avoiding insects, allowing certain insects to survive temperatures below -60 C (-76 F)" said Walters. However, this is the first reported isolation of antifreeze from a freeze-tolerant insect (those able to survive freezing).

Current methods used to cryopreserve tissues result in low viability after thaw, in part because existing solutes must be used at concentrations that are often toxic to cells or tissues. Because the new antifreeze molecule exhibits activity at relatively low concentrations in insects, it is possible researchers may be able to use them at low concentrations in the lab too.

According to Walters, "Potential applications for this new class of antifreeze molecules are abundant. In terms of cryopreservation, we may be able to increase viability and enhance survivorship of cells and tissues from other organisms under freezing conditions."