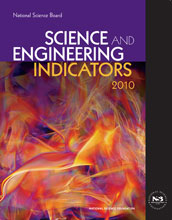 Science and Engineering Indicators 2010 released to the President, Congress and the public.

View a Webcast with Rolf Lehming of the National Science Foundation.

The state of the science and engineering (S&E) enterprise in America is strong, yet its lead is slipping, according to data released at the White House today by the National Science Board (NSB). Prepared biennially and delivered to the President and Congress on even numbered years by Jan. 15 as statutorily mandated, Science and Engineering Indicators (SEI) provides information on the scope, quality and vitality of America's science and engineering enterprise.  SEI 2010 sheds light on America's position in the global economy.

"The data begin to tell a worrisome story," said Kei Koizumi, assistant director for federal research and development (R&D)in the President's Office of Science and Technology Policy (OSTP). Calling SEI 2010 a "State of the Union on science, technology, engineering and mathematics," he noted that quot;U.S. dominance has eroded significantly."

Over the past decade, R&D intensity--how much of a country's economic activity or gross domestic product is expended on R&D--has grown considerably in Asia, while remaining steady in the U.S. Annual growth of R&D expenditures in the U.S. averaged 5 to 6 percent while in Asia, it has skyrocketed. In some Asian countries, R&D growth rate is two, three, even four, times that of the U.S.

In terms of R&D expenditures as a share of economic output, while Japan has surpassed the U.S. for quite some time, South Korea is now in the lead--ahead of the U.S. and Japan. And why does this matter? Investment in R&D is a major driver of innovation, which builds on new knowledge and technologies, contributes to national competitiveness and furthers social welfare. R&D expenditures indicate the priority given to advancing science and technology (S&T) relative to other national goals.

NSB SEI 2010 Committee Member Jose-Marie Griffiths discussed another key indicator: intellectual research outputs. "While the U.S. continues to lead the world in research publications, China has become the second most prolific contributor." China's rapidly developing science base now produces 8 percent of the world's research publications, up from its just 2 percent of the world's share in 1995, when it ranked 14th.

Patents are another measure of valuable contributions to knowledge and inventions to societies. Inventors from around the globe seek patent protection in the U.S. U.S. patents awarded to foreign inventors offer a broad indication of the distribution of inventive activity around the world. While inventors in the U.S., the European Union (EU) and Japan produce almost all of these patents, and U.S. patenting by Chinese and Indian inventors remains modest, the number of patents earned by Asian inventors is on the rise, driven by activity in Taiwan and South Korea.

The Digest contains these and other key indicators, such as the globalization of capability; funding, performance and portfolio of U.S. R&D trends; and the composition of the U.S. S&E workforce. What's more, the Digest is electronically linked with detailed data tables and discussions in the main volumes of SEI. It can also be downloaded to laptops, iPods or other devices. "This makes the data much more accessible and digestable to policymakers, as well as to members of the general public who may wish to read about and understand the data that describe the state of their economy," said Lanzerotti.

Calling SEI a "biennial production and a daily source of pride for NSF," Bement characterized it as a guide to the future. "It is not just where we stand; it's about where we're heading," he said, quoting 19th century British scientist Lord Kelvin, "'If you cannot measure it, you cannot improve it.'"

Representing OSTP Director John Holdren and his OSTP colleagues, in closing Koizumi said, "We promise to put your work to good use."

SEI is prepared by NSF's Division of Science Resources Statistics (SRS) on behalf of the National Science Board. The publication is subject to extensive review by outside experts, interested federal agencies, Board members and SRS internal reviewers for accuracy, coverage and balance.

In further carrying out its responsibility to advise the President and Congress on science and engineering issues, in February, the NSB will release a companion, policy piece, Globalization of Science and Engineering Research.

To review Science and Engineering Indicators 2010, and the Digest, visit http://www.nsf.gov/statistics/indicators.

The NSB is the 25-member policymaking body for the National Science Foundation and advisory body to the President and Congress on science and engineering issues. Drawn from universities and industry, and representing a variety of science and engineering disciplines and geographic areas, NSB members are selected for their eminence in research, education, or public service, and records of distinguished service. The NSB has 24 members that serve six-year terms. The 25th member is the NSF Director, an ex officio member of the NSB. For more background on the NSB and its current composition, visit: http://www.nsf.gov/nsb/about/index.jsp.