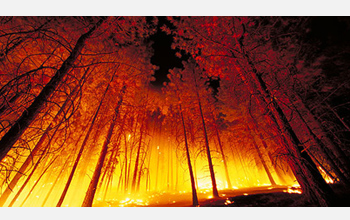 The use of prescribed burns to manage western forests may help the United States reduce its carbon footprint.

Results of a new study find that such burns, often used by forest managers to reduce underbrush and protect bigger trees, release substantially less carbon dioxide emissions than wildfires of the same size.

"It appears that prescribed burns can be an important piece of a climate change strategy," says Christine Wiedinmyer, a scientist at the National Center for Atmospheric Research (NCAR) in Boulder, Colo., and lead author of the new study.

"If we reintroduce fires into our ecosystems, we may be able to protect larger trees and significantly reduce the amount of carbon released into the atmosphere by major wildfires."

The research results are published this week in the journal Environmental Science & Technology. The study was funded by the National Science Foundation (NSF), NCAR's sponsor.

Drawing on satellite observations and computer models of emissions, scientists concluded that widespread prescribed burns can reduce fire emissions of carbon dioxide in the West by an average of 18 to 25 percent, and by as much as 60 percent in certain forest systems.

By clearing out the underbrush, these controlled burns reduce the chances of subsequent high-severity wildfires, thereby protecting large trees and keeping more carbon locked up in the forest.

"When fire comes more frequently, it's less severe and causes lower tree mortality," says Matthew Hurteau of Northern Arizona University, the paper's co-author. "Fire protects trees by clearing out the fuel that builds up in the forest."

When trees burn down or die, much of that carbon is returned to the atmosphere. It can take decades for forest regrowth to sequester the amount of carbon emitted in a single fire.

In the western United States, land managers for more than a century have focused on suppressing fires, which has led to comparatively dense forests that store large amounts of carbon.

But these forests have become overgrown and vulnerable to large fires. Changes in climate, including hotter and drier weather in summer, are expected to spur increasingly large fires in the future.

This could complicate U.S. efforts to comply with agreements on reducing carbon emissions.

Such agreements rely, in part, on forest carbon accounting methodologies that call for trees to store carbon for long periods of time.

Large carbon releases from wildland fires over the next several decades could influence global climate as well as agreements to reduce emissions.

To determine whether prescribed burns would likely affect the carbon balance, the scientists first estimated actual carbon emissions from fires for 11 western states from 2001 to 2008.

The scientists used satellite observations of fires and a sophisticated computer model, developed by Wiedinmyer, that estimates carbon dioxide emissions based on the mass of vegetation burned.

Their next step was to estimate the extent of carbon emissions if western forests, during the same time period, had been subjected to a comprehensive program of prescribed burns.

The scientists used maps of vegetation types, focusing on the forest types that are subject to frequent natural fires and, therefore, would be top candidates for prescribed burns.

Emissions in the model were based on observations of emissions from prescribed burns of specific types of forests.

The results showed that carbon emissions were reduced by anywhere from 37 to 63 percent for the forests that had been subject to prescribed burns, depending on the vegetation mix and location of the forests.

Overall, carbon emissions for the 11 Western states were reduced by an annual average of 14 million metric tons.

The authors cautioned, however, that the actual impacts in the western states would likely be lower.

The study assumed that prescribed burns could be set in all suitable forests, whereas forest managers in reality would be hard-pressed to set so many fires, especially in remote regions or near developments.

New Mexico had the highest average annual reduction (35 percent) because of its forest types, followed by Montana, Arizona, California and Colorado.

The study notes that prescribed burns could lead to additional air quality benefits.

Previous research has indicated that such burns could reduce emissions of pollutants such as fine particulate matter and carbon monoxide.

"While it can be costly to set controlled fires, there is also a cost in leaving forests vulnerable to larger fires," Wiedinmyer says. "More research can help forest managers make better decisions about our forests and climate change."