Scientists Explore Origins of 'Supervolcanoes' on the Sea Floor 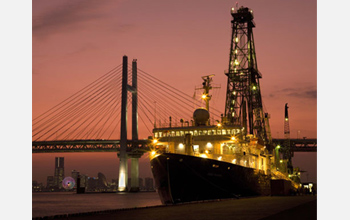 "Supervolcanoes" have been blamed for multiple mass extinctions in Earth's history, but the cause of their massive eruptions is unknown.

Despite their global impact, the eruptions' origin and triggering mechanisms have remained unexplained. New data obtained during a recent Integrated Ocean Drilling Program (IODP) expedition in the Pacific Ocean may provide clues to unlocking this mystery.

To explore the origins of these seafloor giants, scientists drilled into a large, 145 million-year-old underwater volcanic mountain chain off the coast of Japan.

"Loss of species, increased greenhouse gases in the atmosphere, and changes in ocean circulation," says Batiza.

In fall 2009, an international team of scientists participating in IODP Expedition 324 drilled five sites in the ocean floor. They studied the origin of the 145 million-year-old Shatsky Rise volcanic mountain chain.

This underwater mountain chain is one of the largest supervolcanoes in the world: the top of Shatsky Rise lies three and a half kilometers (about two miles) below the sea's surface, while its base plunges to nearly six kilometers (four miles) beneath the surface.

Shatsky Rise is composed of layers of hardened lava, with individual lava flows that are up to 23 meters (75 feet) thick.

"Seafloor supervolcanoes are characterized by the eruption of enormous volumes of lava," says William Sager of Texas A&M University, who led the expedition with co-chief scientist Takashi Sano of Japan's National Museum of Nature and Science in Tokyo. "Studying their formation is critical to understanding the processes of volcanism, and the movement of material from Earth's interior to its surface."

About a dozen supervolcanoes exist on Earth; some are on land, while others lie at the bottom of the ocean. Those found on the seafloor are often referred to as large oceanic plateaus.

Current scientific thinking suggests that these supervolcanoes were caused by eruptions over a period of a few million years or less--a rapid pace in geologic time.

Each of these supervolcanoes produced several million cubic kilometers of lava--about three hundred times the volume of all the Great Lakes combined--dwarfing the volume of lava produced by the largest present-day volcanoes in places like Hawaii.

Since the 1960s, geologists have debated the formation and origin of these large oceanic plateaus. The mystery lies in the origin of the magma, molten rock that forms within the Earth.

A magma source rising from deep within the Earth has a different chemical composition than magma that forms just below Earth's crust. Some large oceanic plateaus show signs of a deep-mantle origin. Others exhibit chemical signatures indicative of magma from a much shallower depth.

A widely-accepted explanation for oceanic plateaus is that they form when magma in the form of a "plume head" rises from deep within the Earth to the surface.

An alternative theory suggests that large oceanic plateaus can originate at the intersection of three tectonic plates, known as a "triple junction."

Shatsky Rise could play a key role in this debate, because it formed at a triple junction. However, it also displays characteristics that could be explained by the plume head model.

"Shatsky Rise is one of the best places in the world to study the origin of supervolcanoes," says Sager. "What makes Shatsky Rise unique is that it's the only supervolcano to have formed during a time when Earth's magnetic field reversed frequently."

This process creates "magnetic stripe" patterns in the seafloor. "We can use these magnetic stripes to decipher the timing of the eruption," says Sager, "and the spatial relationship of Shatsky Rise to the surrounding tectonic plates and triple junctions."

Sediments and microfossils collected during the expedition indicate that parts of the Shatsky Rise plateau were at one time at or above sea level, and formed an archipelago during the early Cretaceous period (about 145 million years ago).

Shipboard lab studies show that much of the lava erupted rapidly, and that Shatsky Rise formed at or near the equator.

As analyses continue, data collected during this expedition will help scientists resolve the 50 year-old debate about the origin and nature of large oceanic plateaus.

The JOIDES Resolution is one of the primary research vessels of IODP, an international marine research program dedicated to advancing scientific understanding of the Earth through drilling, coring, and monitoring the subseafloor. The vessel is operated by the U.S. Implementing Organization of IODP, consisting of the Consortium for Ocean Leadership, Texas A&M University, and Lamont-Doherty Earth Observatory of Columbia University.