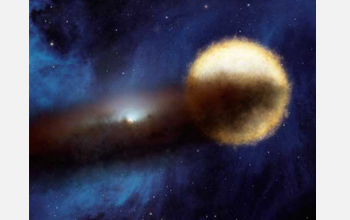 For the first time, a team of astronomers has imaged the eclipse of the star Epsilon Aurigae by its mysterious, less luminous companion star. Very high-resolution images, never before possible, have been published online today in the journal Nature Letters. Epsilon Aurigae has been known since 1821 as an eclipsing double star system, but astronomers have struggled for many decades trying to decipher the clues to what was causing these eclipses, which happen every 27 years. The new image largely settles the matter: the eclipse is caused by a disk of material, probably similar to the state of our solar system 4.5 billion years ago as the planets began to form around our own infant sun.

Seeing this eclipse in detail has only now become possible. Kloppenborg's research advisor, University of Denver Professor Robert Stencel, describes this long-awaited discovery, "Having studied this star on and off since my postdoctoral days in the 1980s during its last eclipse, it is very satisfying to finally resolve some of the long-standing questions associated with this famous star."

The image was obtained using the interferometric technique, an old idea that incorporates computer control and laser connections among multiple telescopes to achieve signal equivalent to one giant telescope.

"To capture the detail on Epsilon Aurigae, we've made use of the biggest optical telescope on earth, the 330-meter (1,083 feet) diameter CHARA Array atop Mount Wilson, California," said Stencel. To comprehend its size, note that 100 meters (328 feet) is roughly the length of a football field.

The CHARA Array is a collection of six telescopes, spread out over the grounds of Mount Wilson Observatory, in which individual beams of light are brought together using extraordinarily precise beam combiners to synthesize a giant telescope hundreds of meters across. The array is owned by Georgia State University (GSU) and operated by GSU's Center for High Angular Resolution Astronomy. In routine operations since 2005, the CHARA Array has already produced a number of astronomical "firsts" though its ability to produce images of unprecedented resolution.

CHARA Director and GSU Regents' Professor Harold McAlister noted, "The size of Epsilon Aurigae in these amazing new images is equivalent to the angular size of an 11-point font letter 'o' seen from a distance of more than 150 kilometers (93 miles)."

Key to the imaging success of the CHARA Array is the Michigan Infrared Combiner (MIRC), created by University of Michigan Professor John Monnier.  MIRC enables the type of multi-telescope linkage that is required to produce such images and enables more of the potential of CHARA to be used in parallel for image reconstruction. The combination of MIRC at CHARA has already produced the first image ever made of a normal star other than the sun, as well as the first images of a double star system in which one component is shedding matter to its companion star.

The images of Epsilon Aurigae show the intrusion of an apparently wedge-shaped structure across the face of a huge star, nearly 150 times the size of our sun. The images of the star and wedge-shaped structure show the direct motion over a month, yielding a measurement of the relative masses of the components. The primary star itself is thought to be in a very interesting phase of its own evolution, turning out to be less massive than the eclipsing disk and the star hidden at the center of that disk.

Independently, Stencel and collaborators from the California Institute of Technology and Kitt Peak National Observatory had assembled data to show the disk contains a large, hot star known as a B5V object, describing its mass and temperature. This prior work set the stage to then evaluate the mass of the disk itself, based on the CHARA images.

It turns out the disk is as wide as the orbit of Jupiter, nearly as tall as the orbit of Earth, but contains a little less than the mass of Earth altogether. "This is a fairly direct measurement of characteristics of a disk, in contrast to the usual disk studies where indirect evidence and lots of assumptions are the only means of characterization available. With some luck, we can obtain more CHARA images this year and develop the equivalent of an MRI scan of the entire disk through eclipse," noted Stencel.

Because astronomers hadn't observed much light from the faint companion, the prevailing opinion labeled it a smaller star orbited edge-on by a thick disk of dust. The theory held that the disk's orbit must be in precisely the same plane as the dark object's orbit around the brighter star, and all of this had to be occurring in the same plane as Earth's vantage point. This would be an unlikely alignment, but it explained observations. The new images show that this is indeed the case. A geometrically-thin, dark, dense, but partially-translucent cloud can be seen passing in front of Epsilon Aurigae.

"This really shows that the basic paradigm was right, despite the slim probability," Monnier said. "It kind of blows my mind that we could capture this. There's no other system like this known. On top of that, it seems to be in a rare phase of stellar life. And it happens to be so close to us! It's extremely fortuitous."

The star began its current eclipse during late summer 2009, seemingly affecting us on Earth as well. Stencel and Kloppenborg had applied for CHARA observing time earlier that year. While waiting for the star to become well-placed in the nighttime sky, Mother Nature had other plans: the Station Fire broke out in the San Gabriel Mountains around Mount Wilson in late August 2009, consuming hundreds of thousands of acres of National Forest over several weeks and shutting down operations at the observatory.

For weeks thereafter, access to Mount Wilson was closed to all, and only with great fortune were the November and December 2009 observations accomplished. Not long after that, in early 2010, with the arrival of the rainy season, extensive mudslides destroyed sections of the access road to Mount Wilson. Despite the challenges, with road repairs underway, there is hope for more observations during this rare but long eclipse, which will last for the rest of 2010.

"We have witnessed the initial phases of this eclipse, and we certainly don't want to miss the rest of the show," said Kloppenborg.