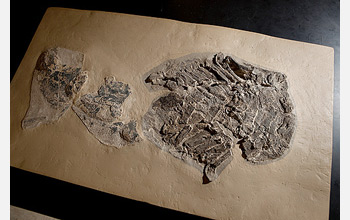 A Gladbachus shark fossil used in the research, pictured in the scientists' lab.

A mass extinction of fish 360 million years ago hit the reset button on Earth's life, setting the stage for modern vertebrate biodiversity. The mass extinction scrambled the species pool near the time at which the first vertebrates crawled from water towards land.

Those few species that survived the bottleneck were the evolutionary starting point for all vertebrates--including humans--that exist today, according to results of a study published this week in the journal Proceedings of the National Academy of Sciences (PNAS).

"Everything was hit; the extinction was global," said Lauren Sallan of the University of Chicago and lead author of the paper. "It reset vertebrate diversity in every single environment, both freshwater and marine, and created a completely different world."

The Devonian Period, which spanned from 416 to 359 million years ago, is also known as the Age of Fishes for the broad array of species present in Earth's aquatic environments.

Armored placoderms such as the gigantic Dunkleosteus and lobe-finned fishes--similar to the modern lungfish--dominated the waters, while ray-finned fishes, sharks and tetrapods were in the minority, according to Maureen Kearney, program director in the National Science Foundation (NSF)'s Division of Environmental Biology, which funded the research, along with NSF's Division of Earth Sciences.

But between the latest Devonian Period and the subsequent Carboniferous period, placoderms disappeared and ray-finned fishes rapidly replaced lobe-finned fishes as the dominant group, a demographic shift that persists to today.

"The Devonian period is known as the Age of Fishes, but it's the wrong kind of fish," Sallan said. "Just about everything dominant in the Devonian died at the end of the period and was replaced."

"There's some sort of pinch at the end of the Devonian," said the paper's second author, Michael Coates, an organismal biologist and anatomist at the University of Chicago.

"It's as if the roles persist, but the players change: the cast is transformed dramatically. Something happened that almost wiped the slate clean, and, of the few stragglers that made it through, a handful then re-radiate spectacularly."

Scientists have long theorized that the Late Devonian Kellwasser event--considered to be one of the "Big Five" extinctions in Earth's history--was responsible for a marine invertebrate species shake-up.

But an analysis of the vertebrate fossil record by Sallan and Coates pinpointed a critical shift in diversity to the Hangenberg extinction event 15 million years later.

Prior to the extinction, lobe-finned forms such as Tiktaalik and the earliest limbed tetrapods such as Ichthyostega had made the first tentative "steps" toward a land-dwelling existence.

But after the extinction, a long stretch of the fossil record known as "Romer's Gap," is almost barren of tetrapods, a puzzle that had confused paleontologists for many years.

Sallan and Coates' data suggest that the 15-million-year gap was the hangover after the traumatic Hangenberg event.

"Something that's seen after an extinction event is a gap in the records of survivors," Sallan said. "You have a very low diversity fauna, because most things have been killed off."

When tetrapods finally recovered, those survivors were likely the great-great-grandfathers to the vast majority of land vertebrates present today.

Modern vertebrate traits--such as the motif of five-digit limbs that is shared by all mammals, birds and reptiles in utero--may have been set by this early common ancestor, the authors propose.

"Extinction events remove a huge amount of biodiversity," Coates said. "That shapes in a very significant way the patchiness of biodiversity that persists to the present day."

The analysis benefitted from recent advances in filling in the vertebrate fossil record, Coates said.

Previously, estimates of the earlier extinction had been made using fossils of invertebrates such as mollusks and clams, which are far more abundant.

With a larger dataset of vertebrates and analytical techniques borrowed from modern ecology, Sallan and Coates were able to see the abrupt changes in species composition before and after the Hangenberg event.

"It's a big extinction during what was already considered a critical time in vertebrate evolution, so it's surprising that it went unnoticed for so long," Sallan said. "But it took the right methods to reveal its magnitude."

What remains mysterious is exactly what happened 360 million years ago to trigger this mass extinction.

Other researchers have found evidence of substantial glacier formation at the end of the Devonian period, which would have dramatically lowered sea levels and affected life.

The first appearance of forest-like environments in some regions might also have produced atmospheric changes catastrophic to animal life.

The research also raises questions about the pattern of evolution after the extinction event.

It remains unclear why groups that were abundant before the event did not recover, while other groups spread and diversified in radical new ways.

Regardless of these questions, the consequences are still being felt hundreds of millions of years later.

"It is a pivotal episode that shaped modern vertebrate biodiversity," Coates said. "We are only now beginning to place that important event in the history of life and the history of the planet, which we weren't able to do before."

Funding was also provided by the University of Chicago Hinds Fund, the Paleontological Society, the Palaeontological Association, the American Society of Ichthyologists and Herpetologists, and the Evolving Earth Foundation.