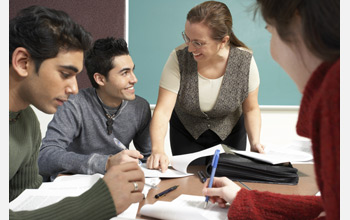 In 2008, there were more students enrolled in U.S. science and engineering (S&E) graduate programs than in the previous year. New National Science Foundation (NSF) data show graduate enrollment in S&E programs grew 2.5 percent over comparable data for 2007. Noteworthy was the 7.8 percent increase in first-time, full-time enrollments of S&E graduate students, and the increase occurred across all S&E fields.

NSF's Division of Science Resources Statistics released the data today in an InfoBrief posted on the federal agency's website. The survey, the 2008 Survey of Graduate Students and Postdoctorates in Science and Engineering (GSS), was cosponsored by NSF and the National Institutes of Health (NIH).

These data can be seen as leading indicators of growth in S&E graduate degrees at the master's and doctoral level. They help fulfill NSF's mandate to provide federal agencies information for policy formulation.

Overall, the class of new full-time graduate students entering S&E fields in fall 2008 was the largest in the history of the survey, which began in 1973. The numbers also showed a 10-year span in which enrollment in S&E graduate programs increased each year, with the exception of a 1-year decline from 2003 to 2004.

A key component in growth during this period was the variation in first-time enrollment by citizenship. From 2001 to 2003, growth was driven by increases in enrollment by U.S. citizens and permanent residents. From 2007 to 2008, increases in first-time, full-time enrollment of foreign students on temporary visas was 11 percent, which outpaced the 5.9 percent for U.S. citizens and permanent residents in S&E fields. The decline in 2003-04 was driven by decreasing foreign enrollment.