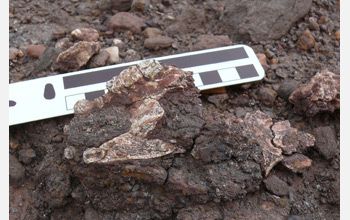 View a videoscan of the primate fossil.

A new Catarrhine primate fossil discovered in Saudi Arabia suggests the evolutionary spilt between Old World monkeys and humans occurred older than previously thought, around 29 million years ago. The discovery challenges the theory that the groups diverged around 5 million years earlier than the date of the recent fossil find.

Geologist and paleontologist Iyad Zalmout and his colleagues from the University of Michigan and the Saudi Geological Survey reported the finding this week in the journal Nature.

Scientists long ago concluded humans and apes have a common ancestor with Old World monkeys, but it is unclear when the two groups diverged from that common ancestor. But the new catarrhine fossil, Saadanius hijazensis, found by Zalmout and his research team in western Saudi Arabia by the Red Sea is helping to shed light.

This is "the first substantial fossil primate from Arabia and from a period of between 30 and 23 million years ago where almost all the primate fossil record from this period is very rare, and if any is found, it is not as complete as this discovery," said Zalmout. The fossil, found in 2009, is dated to 29-28 million years ago. This discovery according to Zalmout emphasizes that "Afro-Arabia is the center of catarrhine origin and evolution."

The fossil preserves most of the face, the front upper part of the skull, the temporal bone and the palate, with some of the left and right upper teeth. By studying the length of the canine roots and the molar size, the researchers determined the fossil was an adult male and probably weighed 30-40 pounds.

Catarrhini is the name given to Old World apes and monkeys grouped collectively, and Saadanius is the most advanced primate known that has general catarrhine characteristics but still lacks the particular traits found in either apes or Old World monkeys.

Saadanius is intermediate in geological age and morphology between older and more primitive ape-like primates from Egypt, and later and more advanced apes and Old World monkeys from East Africa.

Since Saadanius hijazensis is dated 29-28 million years ago, this finding suggests that the split between Old World Monkeys and the line leading to humans occurred older than previously thought. Instead of 25-23 million years ago as originally thought by paleontologists, the split probably happened around 29 million years ago. This new geological evidence from the fossil record shows that molecular clock DNA estimates of an older divergence are not likely to be correct.

Principal investigator Philip Gingerich, University of Michigan professor of paleontology, adds that "the new primate was found while searching for geological strata that might yield fossil whales, which shows the importance of ongoing exploration in new areas." Richard Lane, program manager in NSF's earth sciences division, explained that the "discovery of Saadanius hijazensis is a side benefit of NSF supported research in non-hominid vertebrate paleontology. It emphasizes the need for strong field support in the historical geosciences."

This research was supported by the National Science Foundation and the Saudi Geological Survey.