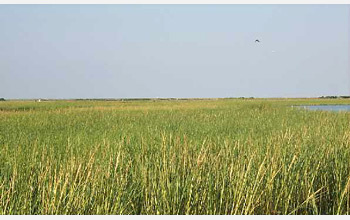 NSF-funded scientists are studying the effect of oil and dispersants on Louisiana salt marshes.

As oil and dispersants wash ashore in coastal Louisiana salt marshes, what will their effects be on these sensitive ecosystems?

The National Science Foundation (NSF) has awarded a rapid response grant to scientist Eugene Turner of Louisiana State University and colleagues to measure the impacts on Gulf Coast salt marshes.

The researchers will track short-term (at the current time, and again at three months) and longer-term (at 11 months) exposure to oil and dispersants.

The coast of Louisiana is lined with extensive salt marshes whose foundation is two species of Spartina grass.

In brackish marshes, Spartina patens is the dominant form. It's locally known as wiregrass, marsh hay and paille a chat tigre (hair of the tiger).

In more saline marshes closer to the Gulf of Mexico, Spartina alterniflora, also called smooth cordgrass and oyster grass, takes over. A tall form of this wavy grass grows on the streamside edge of the marsh; a shorter form grows behind it.

In their NSF study, the biologists will document changes in these critically-important Spartina grasses, as well as in the growth of other salt marsh plants, and in marsh animals and microbes.

Field investigators will collect samples three times at 35 to 50 sites and analyze the oil and dispersants after each expedition.

"Data are being collected that may be used as indicators of the long-term health of the salt marsh community," says Turner. "From these data, we will obtain information that precedes potentially far-reaching changes.

"This exceptionally large oil spill and subsequent remediation efforts are landmark opportunities to learn about short- and long-term stressors on salt marsh ecosystems."

Salt marsh stressors, such as those from oil spills, can have dramatic, visible, and immediate direct impacts, Turner says, on marshes and surrounding uplands.

"They also have indirect effects because, as oil and dispersants begin to degrade, they enter food webs via primary consumers such as suspension-feeding oysters, deposit-feeding bivalves, and grazing gastropods," says David Garrison of NSF's Division of Ocean Sciences, which funded the research.

These "primary consumers," in turn, serve as food sources for those at higher trophic levels--including humans.

As contaminants make their way up the food chain, they may become concentrated, as in the well-known example of mercury in fish.

"The effects of environmental stressors can cascade through ecosystems as metabolic pathways are altered," says Todd Crowl of NSF's Division of Environmental Biology, which co-funded the research. "The result may be an ecosystem that's radically altered well into the future."

The research, says Turner, is a benchmark study in salt marsh ecosystem change, and will answer key questions about salt marsh stability.