Homoplasy: A Good Thread to Pull to Understand the Evolutionary Ball of Yarn

Studying the many potential reasons why the same trait has independently evolved in different species (homoplasy) can improve our understanding of the genetic, developmental and evolutionary relationships among species 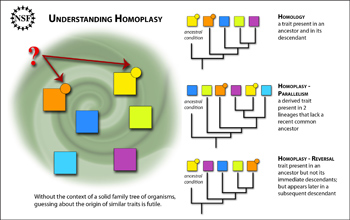 An evolutionary tree must be created to determine why two species share the same trait.

With the genetics of so many organisms that have different traits yet to study, and with the techniques for gathering full sets of genetic information from organisms rapidly evolving, the "forest" of evolution can be easily lost to the "trees" of each individual case and detail.

A review paper published this week in Science by David Wake, Marvalee Wake and Chelsea Specht, all currently National Science Foundation grantees, suggests that studying examples of homoplasy can help scientists analyze the overwhelming deluge of genetic data and information that is currently being generated.

For example, studying situations where a derived trait surfaces in two lineages that lack a recent common ancestor, or situations where an ancestral trait was lost but then reappeared many generations later, may help scientists identify the processes and mechanisms of evolution.

The authors provide many fascinating examples of homoplasy, including different species of salamanders that independently, through evolution, increased their body-length by increasing the lengths of individual vertebrae. By contrast, most species grow longer by adding vertebrae through evolution.

The authors also explain how petals in flowers have evolved on six separate occasions in different plants. A particularly striking example of homoplasy cited by the authors is the evolution of eyes, which evolved many times in different groups of organisms--from invertebrates to mammals--all of which share an identical genetic code for their eyes.

These kinds of examples of genetic and developmental biology help scientists elucidate relationships between organisms, as well as develop a fuller picture of their evolutionary history.