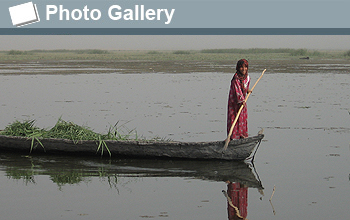 Explore the marshlands-turned-desert in this photo gallery.

Learn more about the Iraqi marshes and the origins of Mesopotamian cities in this photo gallery and in these videos featuring Jennifer Pournelle and Jennifer R. Smith.

"Mesopotamia"--Greek for "the land between the rivers"--is an area about 300 miles long and 150 miles wide straddling the Tigris and Euphrates rivers, which now run through Iraq, northeastern Syria, southeastern Turkey and southwestern Iran. It is broadly considered a cradle of civilization, because urban societies first developed there, about six thousand years ago.

"This is an important project because it has the potential to shed new light on the processes by which civilization rose in the Near East," said John Yellen, an NSF program director for archeological research.

The researchers proposed the project to probe how the area's gulf shoreline and marshes contributed to the economic foundation of Mesopotamian cities. Specifically, they wanted to investigate archaeological sites from 5,000 B.C. to Islamic times to learn more about how wetland resources contributed to the locale's towns and cities during the early- to mid-Holocene period.

"Our interest is in early settlement," said Hritz, an assistant professor of archaeological anthropology at Penn State. "The early period of settlement is always linked to the development of agriculture."

An area of keen interest for the researchers was the Hammar marshlands, located south of the Euphrates River in Iraq and Iran, which were drained between 1950 and the 1990s, in part, to facilitate oil exploration and development. But after the first Gulf War, former Iraqi President Saddam Hussein diverted the Euphrates River away from the area, causing the marshlands to almost entirely disappear, while at the same time making it more accessible to archeologists.

Foreign archeological investigations there stopped, while Iraqis continued only limited research. "But because their work is unpublished, we are unsure of where they surveyed," said Hritz.

The three members of the research team were able to get a look--for the first time in nearly two decades.

"Certainly having pedestrian access to much of the region was a help," said Smith, who is an associate professor of Earth and Planetary Sciences and Environmental Studies at Washington University in St. Louis. "However, we only got to see a limited and relatively disturbed portion of the existing remnant marshlands, which made it harder to develop a real modern analog for past wetland environments."

"One thing that really surprised us was the surface condition of the dried bed of Lake Hammar. We expected it to be significantly deflated by wind scouring, like the silty desert areas around other major sites we visited," said Pournelle. "Instead, it was 'sealed' beneath a layer of consolidated silt and shell--obscuring any indication of what might lie below the surface."

"It surprised me that sometimes features clear on the imagery were virtually indiscernible from the ground, Smith added, pointing out the paleochannels as an example. "It is exceedingly important to use both remote sensing and groundtruthing in these incredibly flat regions." Smith was a co-principal investigator for the study.

Restoration of the Hammar marshes is now a high national priority in Iraq. The researchers say if they do not act quickly, the window of opportunity for conducting future work in the region will close.

"Iraq holds a wealth of significant archaeological sites and it has a long history of archaeological research," said Yellen. "Hopefully, this project will help reinvigorate this rich tradition."

But getting to the sites to carry out a survey in a country at war can be a bit tricky.

"Ultimately, we found that the only way to get into the country that was cost effective was to go on a tour with a British tour company," said Hritz. "While in Bagdad, we met with the State Board of Antiquities and Heritage (SBAH), and they encouraged us to visit the sites with a SBAH representative and report back to them any observations."

"We never imagined the degree of cooperation and openness," said research principal investigator Pournelle, a research assistant professor in the Environment and Sustainability Program of the School of the Earth, Ocean, and Environment at the University of South Carolina. "All of the ministries, universities and faculties involved were incredibly generous with their time and resources."

The researchers used local Iraqi security for their trip rather than a foreign security firm. They spent a week travelling with Hinterland Tours from Bagdad to Basra, the capital of Basra Province in Iraq. While in the Basra area, they then spent five days with a private guide conducting a geoarchaeological survey.

"We saw everything we intended to see, except for one area that was flooded," said Hritz. "We did not have the proper equipment to enter the flooded area."

The researchers hope to conduct more studies in Iraq.

"Next is systematic seismological study, coring and survey in order to relate past and future archaeological excavations and surveys to an explicit paleoenvironmental record," said Pournelle. "Amazingly, this has never been done.  We need to work quickly on the ground-based operations, because some of this area is scheduled for re-flooding."

Hritz reported on the current survey at the annual meeting of the Society of American Archaeology in Sacramento, Calif.

A National Science Foundation high risk grant in archaeology and a grant from NSF's Division of Earth Sciences supported this research.