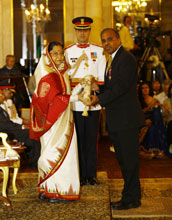 Subra Suresh, director of the National Science Foundation (NSF), was awarded the prestigious Padma Shri today by the President of the Republic of India. Suresh, a United States citizen, was recognized for his distinguished work in U.S. science and engineering. The award was bestowed during a ceremony at the Rashtrapati Bhawan in New Delhi.

Padma Shri is one of the highest civilian honors bestowed by the Indian government. It honors service in any field and can include citizens of countries other than India.

Earlier in the week, Suresh addressed the Indian Institute of Technology in Chennai and talked about the impact of investing in fundamental research. "Advances in science and engineering have become central to the aspirations of all nations. Nations understand that building powerful economic momentum can come about through building a world-class science and engineering workforce and research capacity," Suresh said.

Prior to becoming NSF director in October 2010, Suresh served as dean of the School of Engineering and Vannevar Bush Professor of Engineering at the Massachusetts Institute of Technology (MIT). He joined MIT's faculty ranks in 1993 as the R.P. Simmons Professor of Materials Science and Engineering.

A mechanical engineer interested in materials science and biology, Suresh pioneered research to understand the mechanical properties of materials. His most recent research tackled the biomechanics of red blood cells under the influence of diseases such as malaria. In 2006, Technology Review magazine selected Suresh's work on nanobiomechanics as one of the top 10 emerging technologies that "will have a significant impact on business, medicine or culture."