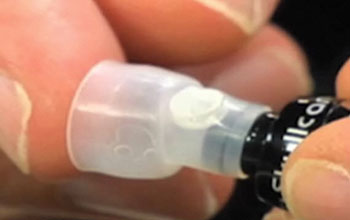 
Research suggests a cause, and potential solution for listener fatigue caused by in-ear headphones.

View a video, a webcast and an animation on novel approaches to counter the discomfort and pain from in-ear headphones and hearing aids. For more video clips, contact Dena Headlee at dheadlee@nsf.gov.

Engineers investigating "listener fatigue"--the discomfort and pain some people experience while using in-ear headphones, hearing aids and other devices that seal the ear canal from external sound--have found not only what they believe is the cause, but also a potential solution.

In two separate papers and a presentation at the 130th Audio Engineering Society convention in London on May 14, 2011, Stephen Ambrose, Robert Schulein and Samuel Gido of Asius Technologies in Longmont, Colo., describe how sealing a speaker in the ear canal substantially boosts sound pressures and how a modified ear-tip can help alleviate, or even eliminate, that effect.

"We tried for years to turn down the volume but still experienced audio fatigue, even at the lowest levels we could get by with on stage," says Ambrose, who has been leading the development of in-ear monitors for more than 35 years as a musician and audio engineer for leading artists and film studios. "The fatigue couldn't simply be ‘fixed in the [audio] mix' because it now appears to be a physiological phenomenon," he adds. "It wasn't a problem with electronics, but rather mechanics."

Data from the models coupled with laboratory observations suggest that the boost triggers the acoustic reflex, a defense mechanism in the ear that dampens the transfer of sound energy from the eardrum to the cochlea--the auditory portion of the inner ear--by as much as 50 decibels, but does not protect the ear drum from the excessive shaking.

"Paradoxically, the protective reflex makes loud volumes seem lower than they really are," adds Gido, "potentially prompting the listener to turn up the volume even more." The ear drum, already shaken by the oscillations of the pressure chamber, is further impacted by the boosted volume.

The resulting physical strain, along with the repeated activation of the tiny muscles involved in the acoustic reflex, are what the researchers believe may lead to listener fatigue.

To counter the oscillations, Ambrose and his colleagues developed a way to use a synthetic membrane technology outside the ear drum to take the brunt of all the pounding. This "sacrificial membrane" disrupts the excessive pressure waves, protecting the ear drum and preventing the triggering of the acoustic reflex, ultimately leading to lower, safer listening volumes.

The papers describe two approaches for introducing the new membrane technology. The simplest involves a retrofit that can be applied to existing in-ear headphones and builds upon earlier studies of hearing aids. For decades, audiologists have known that sealed ear canals create distracting side effects, such as the occlusion effect that causes one's voice to sound muffled. In years past, audiologists drilled small holes in the earbuds of hearing aids and other audio devices to alleviate the pressure; however, the holes also led to squealing feedback effects and diminished sound quality.

Ambrose discovered that stretching a thin film of medical-grade polymer over these pressure-alleviating holes reseals the ear environment, yet provides a sacrificial membrane to absorb the abusive pressures. Based on the conclusions of the recent papers, the membrane-hole modification appears to eliminate the overpressure effects that impact the users of many headphones, hearing aids and other devices.

The pump, developed with support from NSF's Small Business Innovation Research program, converts the alternating, compression-expansion waves of sound into a direct-flowing stream of molecules, filling the membrane using only minimal energy from the headphone speaker. The pump has enough force to both inflate the ear lens and keep the device comfortably in the ear canal for as long as the device is worn.

"The lens maintains desirable audio fidelity, especially at bass frequencies, and prevents feedback," says Gido. "The flexible membrane vibrates with the oscillating sound pressure in the sealed ear canal and radiates excess sound energy out of the closed space in front of the ear drum. In a sense, the flexible polymer membrane behaves like a second ear drum, which is more compliant than the real ear drum, allowing it to direct excess sound energy away from the sensitive structures of the ear."

The pump takes advantage of a physical property called a synthetic jet, a column of fluid that erupts when an acoustic wave passes through a small hole.

"As sound waves pass through any given small hole, the alternating pulses emerge and retract through the orifice like a small air-piston, hitting and knocking the surrounding air molecules forward like billiard balls," says Ambrose. "Other molecules join in the stream from the sides due to the low pressure created by the flow. This results in a sustained jet of air."

By integrating an inward flowing jet into the side of the sound port, Asius transformed a standard synthetic jet into a real pump capable of harvesting and storing inflation and deflation pressures.

"Our support of the diaphonic valve-on-a-chip and its capabilities for harvesting audio energy to couple communications into the ear arises from both the innovative components of the proposed technology as well as the societal impacts," says Juan Figueroa, the NSF program director who has overseen Asius's grant. "The improvement will allow users improved hearing all the time, rather than being forced to live with reduced hearing again and again due to device-related listener fatigue."

The new technologies emerged from Ambrose's experiences as a recording artist and audio pioneer. In 1976, Ambrose invented what would become the SoundSight MicroMonitor, the first high-fidelity, custom in-ear monitor (IEM), a headphone for monitoring amplified music during concerts.

While the small size, improved sound and other advantages led to wide adoption of the IEMs, users realized early on that extended listening could result in uncomfortable fatigue in the ear, and sometimes pain. The experiences were not unique--hearing-aid users, battlefield soldiers using in-ear protection, and others using sealed-ear-canal devices reported similar experiences.

"From the beginning, I knew something would have to be done about this audio fatigue factor," says Ambrose, though he had trouble proving that pressures were so extreme. "I invented the diaphonic pump partly to prove that audio volumes could create static pressures in the ear that no one ever dreamed were possible."

The researchers corroborated observational data with a computer simulation of the effect, incorporating data from functioning ear canals, cadavers and fluid dynamics models.

Because the reflex is muscular, the researchers believe the repeated engagement and disengagement causes the tiny muscles to fatigue, leading to much of the pain and discomfort associated with listener fatigue. The researchers have submitted applications to conduct extensive studies to determine the role these factors play in contributing to hearing loss.

"With the help of Jay Kadis from Stanford University, we confirmed that the our devices prevented the acoustic reflex from triggering, and the lower volume levels merely sounded louder because the ear was now more sensitive--more sensitive, yet less prone to higher volumes. And, without the reflex, the stapedius muscle was no longer being constantly tired out from overuse. We knew we had a discovery and a solution that would help everyone from professional performers to hearing-aid wearers."