Outstanding Math and Science Teachers Honored by the President 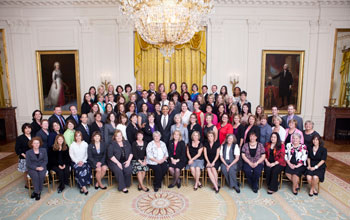 President Obama with PAEMST recipients in the East Room of the White House.

On May 20th, a group of kindergarten thru sixth-grade teachers from accross the United States topped off a visit to the nation's capital by meeting with President Barack Obama. The meeting honored teachers who received the prestigious Presidential Awards for Excellence in Mathematics and Science Teaching (PAEMST).

During their tour of the White House earlier in the day, the educators met briefly with Jill Biden. Both the president and Biden congratulated the teachers and thanked them for their outstanding commitment to the nation's students.

The teachers' visit capped a week of professional development and recognition activities, including a number of interactions with senior members of the Administration and members of Congress.

During dinner with NSF senior advisor Cora Marrett, awardees heard from Kathryn Sullivan, assistant secretary of the Department of Commerce and deputy administrator of the National Oceanic and Atmospheric Administration, and S. James Gates Jr., a member of the President's Council of Advisors on Science and Technology.

"It was wonderful to have the awardees here with us in Washington," said Marrett. "They represent the very best in science and mathematics teaching, and they are a great resource to their schools, to each other and to us."

During their time in Washington, the awardees also had the opportunity to talk with senior education policy staff from the Department of Education, the White House Domestic Policy Council, and the White House Office of Science and Technology Policy.

In announcing the awards to 85 teachers late last month, President Obama said, "The teachers we honor today have demonstrated uncommon skill and devotion in the classroom, nurturing the young minds of tomorrow's science and math leaders. America's competitiveness rests on the excellence of our citizens in technical fields, and we owe these teachers a debt of gratitude for strengthening America's prosperity."

President Obama has committed to strengthen science, technology, engineering and mathematics education and to prepare 100,000 effective science and mathematics teachers over the next decade. These commitments build on the President's "Educate to Innovate" campaign, which has attracted more than $700 million in donations and in-kind support from corporations, philanthropies, service organizations and others to help bolster science and technology education in the classroom.

PAEMST is the nation's highest recognition of kindergarten through 12th-grade mathematics or science teachers for outstanding teaching in the United States. The awards recognize teachers for their contributions in the classroom and to their profession. Awardees serve as models for their colleagues, inspiration to their communities, and leaders in the improvement of mathematics and science education.

In addition to a presidential certificate, awardees received a paid trip for two to Washington, D.C., and a $10,000 award from the National Science Foundation to be used at their discretion.

Of the elementary teachers selected for the award (see list below), there are 44 science teachers and 41 mathematics teachers representing 49 states and three U.S. jurisdictions. The jurisdictions are Washington, D.C.; Department of Defense Education Activity schools; and the U.S. territories as a group--American Samoa, Guam, the Commonwealth of the Northern Mariana Islands and the U.S. Virgin Islands.

PAEMST applications are reviewed at the state and national levels by selection committees of outstanding scientists, mathematicians, and educators. Nominees are then sent to the White House Office of Science and Technology Policy for final selection. The awards alternates between elementary (kindergarten through sixth grade) and secondary (seventh through 12th grade) teachers each year.

Since the program's inception in 1983, more than 4,100 teachers have received this honor. The National Science Foundation administers PAEMST on behalf of the White House Office of Science and Technology Policy.

The 2010 presidential awardees are listed below. For more information, including awardee photos, bios and quotes, visit the Presidential Awards for Excellence in Mathematics and Science Teaching website.