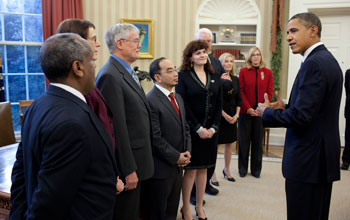 President Barack Obama greets the 2010 and 2011 awardees for the Presidential Awards for Excellence.

President Obama has honored nine individuals and eight organizations as recipients of the Presidential Award for Excellence in Science, Mathematics and Engineering Mentoring. The mentors received their awards at a White House ceremony on Monday, December 12.

Administered by the National Science Foundation (NSF), the Presidential Award for Excellence in Science, Mathematics and Engineering Mentoring is awarded by the White House to individuals and organizations in recognition of the crucial role that mentoring plays in the academic and personal development of students studying science and engineering--particularly those who belong to groups that are underrepresented in these fields. By offering their expertise and encouragement, mentors help prepare the next generation of scientists and engineers while ensuring that tomorrow's innovators reflect and benefit from the diverse talent of the United States.

Colleagues, administrators and students in their home institutions nominate candidates for the award. The mentoring can involve students at any grade level from elementary through graduate school. In addition to being honored at the White House, recipients receive awards of $25,000 from NSF to advance their mentoring efforts.

The mentors and organizations announced yesterday represent the winners for 2010 and 2011.

"Through their commitment to education and innovation, these individuals and organizations are playing a crucial role in the development of our 21st century workforce," President Obama said when he first announced the awardees. "Our nation owes them a debt of gratitude for helping ensure that America remains the global leader in science and engineering for years to come."